After the Week 2 Sunday games in the NFL, here are ten topics you should be talking about this morning. Let’s take a look around the league.

Romo brought the Cowboys back in San Fran behind 345-yards and 2 TDs.

1. Romo: The Dallas QB deserved some criticism after the two fourth quarter turnovers in the Week 1 loss to the Jets, but today we need to give him some credit. Played hurt (ribs), lit up the 'Niners secondary (20-33-345-2TDs) and brought this football team back late in the game to send it to OT. And let’s not forget about the play call in the extra session. Use the play action game (with the slow-play release from WR Jesse Holley) to force the safety to put his eyes right in the backfield—and produce a 77-yard play to set up a winning FG. Big to head back to Dallas with a 1-1 record.

2. Newton vs. the Pack: No question that Newton can play after throwing for 400-plus (again) vs. the Green Bay secondary. But the turnovers are a killer in the NFL. You can’t be careless with the football or give back field position. And the rookie will learn that throwing off his back foot vs. Charles Woodson isn’t going to produce results. Real talent here with the No.1 overall pick, but we saw on Sunday that the NFL can be tough on rookie QBs.

3. “Cheap” football from Dunta Robinson: I have no problem defending a safety, CB or LB when it comes to helmet to helmet contact that can’t be prevented. But the hit I saw from Robinson last night on Philly’s Jeremy Maclin? That’s cheap—and dirty. Had enough time to size up the Eagles’ WR and he still lead with the crown of his helmet. No doubt there is a big fine coming, and considering he is repeat offender after last year’s hit on DeSean Jackson, a suspension wouldn’t surprise me. The NFL might want to use him as an example here.

4. More Brady: Talked about the Patriots offense here on Sunday and focused on the TE position for New England, but with Brady it is all about execution. I am amazed at how patient he is in the pocket when throwing the football and he can work the entire route tree to multiple receivers. Throws for 517-yards on Monday night and comes back with 423-yards and 3 TDs on Sunday in the 35-21 win over the Chargers. Playing the position better than anyone in the league.

5. Tony Gonzalez: Anyone want to say the Falcons’ TE can’t produce anymore? He can still make plays in the red zone and when he runs a simple option route (stick-out), there aren’t many TEs that do it better when we talk about the vertical release, the cut and the ability to catch the football. Go back to the TD catch on the seam route in the red zone. Back side of a slot formation, get the release with an outside stem to create separation and break it back for the score. 7 receptions, 83-yards and 2 TDs in the win over Philly. 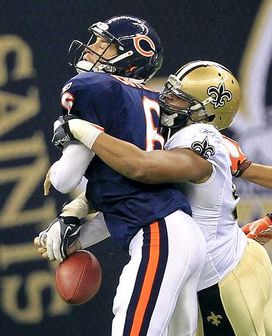 The Saints defense went after Cutler and the Bears on Sunday with their pressure schemes.

6. Long day for Cutler: Talked about the Saints defense on Sunday and there is no question that they dictated the flow of the 30-13 win. However, when we look at this Bears offense, they continue to struggle vs. pressure based defenses. Saints defensive coordinator Gregg Williams continued to bring pressure from the secondary and front-seven down in New Orleans. And if the Bears want to survive against Dom Capers’ unit next Sunday, there have to be corrections made—from both a protection and play calling standpoint.

7. Titans over the Ravens: This is why the NFL is a week-to-week league. The Ravens physically dominated the Steelers in the Week 1 win, but on Sunday struggled to run the ball on offense and couldn’t limit Tennessee QB Matt Hasselbeck (358-yards) in the passing game. The big stat from my perspective? This Baltimore defense didn’t generate one sack down in Nashville.

8. More issues in K.C.: This is a bad football team right now. Can’t play defense, continue to turn the ball over on offense and the overall production is lacking for Todd Haley’s club in Kansas City. On top of that? Another big loss with RB Jamaal Charles going down with a knee injury. I think it is too early to start talking about Haley’s job with the Chiefs, but I haven’t seen anything in the first two weeks of the season to buy K.C. as a contender.

9. Bills bandwagon: I questioned the Bills when they traded away veteran WR Lee Evans, but look at the plays their young WRs are making. After putting 41 points on the board in Week 1, the Bills comeback to beat the Raiders at home with WRs Stevie Johnson (8-96-1 TD) and David Nelson (10-83-1 TD) filling up the stat sheet. On the play to win it? Use pre-snap motion to move Nelson towards the core of the formation and run an underneath combination route that forces the Raiders to bust a coverage. Buffalo is 2-0 and scoring a ton of points.

10. Rex—again: The ‘Skins QB didn’t have the efficiency we saw in the Week 1 win over the Giants, but the point here is what he did late in the game. Throws for 291-yards and puts together two fourth quarter scoring drives. And the TD pass he threw in the final frame? Great ball on the 7 (corner) route to Santana Moss. Hey, the ‘Skins are 2-0 and headed to Dallas next Monday night.