Let’s look back at the Week 4 Sunday action in the NFL. Ten topics you should be talking about, plus some Xs and Os and more reaction to what we saw on the field.

1. Another Romo collapse: I wrote up Calvin Johnson after the Lions comeback win over the Cowboys, but the problem here is all about consistent play at the QB position in Dallas. I wanted to throw Romo a bone last Monday after he played hurt and brought his club back for the second win in a row. But his production in the second half vs. Detroit is very similar to what we saw in the Week 1 loss to the Jets. Romo was poor with his decision making (three interceptions), lost control of the game plan and didn’t close out the Lions with a 27-3 win. Point the finger at Romo here? We have to… 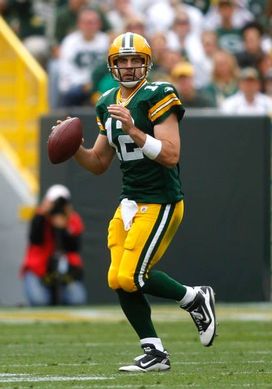 ICONRodgers produced six total TDs as the Packers moved to 4-0 with the 49-23 win at Lambeau.

2. More Rodgers at Lambeau: Six total TDs for the Packers’ QB in the 49-23 win over the Broncos at Lambeau. I think we forget that Rodgers can get out and run when he needs to, and there is no question he can throw the vertical route tree, but inside of the 20-yard line is where I see Rodgers at his best. He is quick with his decision making, reads coverages and delivers the ball. Go back to the 17-yard TD pass to Greg Jennings. Working vs. the Broncos Cover 3 shell (3-deep, 4-under), Rodgers throws the seam route to Jennings before the deep middle of the field safety can plant and drive. 29-38 for 408-yards with 4 TDs passing and two more on the ground.

3. Real issues in Philly: This is a 1-3 football team in Philly. Forget about the numbers from Mike Vick (30-46-416), because we are seeing some bad defensive football with the Eagles. 49ers QB Alex Smith threw for 291-yards and two TDs, but the story here is RB Frank Gore. The Niners’ RB averaged 8.5-yard per carry (15-127) and ran through this Philly defense. I still believe the Eagles have some serious talent at the CB position, but this unit doesn’t tackle well or comes up with big plays. Real concern with the Eagles? Should be after the hype in August.

4. Ravens’ defense: We should point to the Jets’ game plan here, because they look lost as an offense right now, but don't ignore the play from the Baltimore defense. Working vs. Sanchez and New York, this unit controlled the game from a scheme perspective, used multiple blitz packages and didn’t allow the Jets to get any sort of production from the run game. And if you get in third down and long situations vs. this Baltimore defense, you aren’t going to put points on the board. They are just too good at taking away route concepts and forcing the QB to come off his reads.

5. Wes Welker's numbers: Is it crazy to think Welker should be paid Top 5 WR money? The reason I say that is because of the production. Watching him yesterday in the Patriots 31-19 road win at Oakland, Welker (9-158-1 TD) can run the entire route tree. However, what stands out from my perspective is his actual route running ability. He doesn’t chop down, waste movement or take false steps. Instead, we are talking about a WR that runs through his routes and can break inside or outside vs. leverage. I talk about the Lions’ Johnson often at the NFP, but don’t forget about what Welker is doing on a consistent basis for Brady and the Pats. 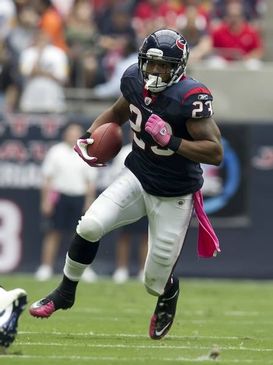 ICONFoster and the Texans ran over the Steelers down in Houston.

6. Steelers look soft up front: That’s the best way to say it. No different than the Week 1 loss to the Ravens, this Pittsburgh team was outplayed up front down in Houston. Wade Phillips’ defense was able to get to Ben Roethlisberger (5 sacks), while RB Arian Foster looked fresh, healthy and had plenty of room to run vs. Dick LeBeau’s unit. Foster finishes with 30 carries for 155-yards. That’s a dedication to the run game from the Houston offense. What does that tell us? The Texans went into this game believing they could physically beat up the Steelers. And that’s exactly what they did.

7. Martz flips the script in Chicago: QB Jay Cutler finished with this stat line: 9-17-102-1 INT. That’s it. He was clearly outplayed by Carolina’s Cam Newton. However, look at the game plan from Martz. The Bears’ offensive coordinator led with the run, stuck to a base game plan (Lead Open, Lead Strong, Power O) and gave the keys of the offense to Matt Forte. The Chicago RB produced 205-yards, broke tackles, used his vision in the open field and gave this offense a completely different. Easy to move the sticks when you get that type of production at the RB position. The question now: Can the Bears produce the same numbers vs. the 4-0 Lions next Monday night?

8. Bad football in Minnesota: The Vikings are in trouble. They drop to 0-4 after the loss to the Chiefs and I am wondering how much longer they go with Donovan McNabb as their No.1. The production isn’t there, and from an offensive perspective, the execution is poor for the Vikings. I don't think we would see a different offense throwing rookie Christian Ponder into the lineup, but when you are a team that can't buy a win, sometimes you need to shake things up (and panic sets in). That usually starts at the QB position. Interested to see where Minnesota goes from here.

9. Eli gives the Giants another win: There should be some talk about the “fumble” from Giants WR Victor Cruz after he “gave himself up” (according to the rule book), but don’t let that take away from Eli Manning getting the win on the road. I know the call was suspect, but when you get another chance (or a free pass) in this league, you must take advantage of it. That’s what Manning did, throwing the 9 route to Hakeem Nicks for a 26-yard score with under three minutes left. The Giants QB is playing at a high level and has thrown six TD passes in the last two weeks.

10. Hasselbeck moves the Titans to 3-1: I’m impressed with the veteran QB. Three more TD passes today and this Titans team is quietly sitting at 3-1 in the AFC South. I was down on Tennessee back in August, because I didn’t see how they were going to win games outside of the production from Chris Johnson. Saw that for the first time this season as the RB goes for 101-yards on 23 carries, but I still go back to Hasselbeck. He is making big plays in the passing game—and that will keep the Titans alive in the division.