Let’s go around the league and talk Week 8 football in the NFL. Breakdowns, some Xs and Os, etc. Ten topics we need to discuss from Sunday’s schedule.

1. Steelers' defensive game plan: Let’s start with what Dick LeBeau did on defense in the 25-17 win over the Patriots. Bring edge pressure and play Covert 1 (man-free) in the secondary. How many times did you see Ike Taylor in a press-look vs. Welker or Troy Polamalu walked down in coverage? This Steelers’ defense took away the intermediate route combinations of the Patriots offense by playing an aggressive brand of football vs. Tom Brady. Challenge WRs/TEs at the line of scrimmage and disrupt the release with safety help in the middle of the field. Don’t be surprised if the rest of the NFL steals some of these defensive looks after watching the tape of Pittsburgh holding New England to 213 total yards. 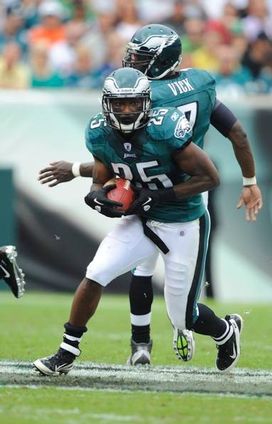 ICONMcCoy (185-yards) was part of a Philly offense that ran right through the Cowboys in a 34-7 win.

2. Andy Reid’s playbook: Andy Reid is 12-0 coming off the bye for a reason, and we saw that from this Eagles’ offense when you break down their play calling. Move the pocket with Vick, counter action with McCoy in the run game, the screen, the inside breaking routes of Reid’s game plan, etc. This offense looked like they were working against the scout team in a Friday practice at times—and the Cowboys’ defense under Rob Ryan couldn’t keep up. McCoy posted 185-yards on 30 carries (2 TDs), Vick throws for 279-yards and 2 TDs (plus 50-yards rushing) and TE Brent Celek finishes with 94-yards and a TD on 7 receptions. That was an offensive clinic from Philly vs. a solid defense.

3. Roethlisberger’s numbers: Ben Roethlisbeger controlled the tempo (and the clock) by methodically working the ball down the field. Take the underneath routes, use the TE position (Heath Miller: 7-85), throw the WR screen and work the middle of the field vs. pressure. The Steelers’ QB completed 36 of 50 passes vs. Belichick’s defense for 365-yards and 2 TDs. The key stat? Pittsburgh converts 10 of 16 third down opportunities. That wins in the NFL when you can keep the defense on the field—and Brady on the bench.

4. Rams upset the Saints: As I wrote on Sunday, give the Rams some real credit here for their game prep and to Steven Jackson for his production (159-yards, 2 TDs), but we need to talk about the St. Louis pass rush. The Rams had six sacks (three for Chris Long) and forced Drew Brees to come off of his initial reads on a consistent basis. This defensive front abused the Saints’ offensive line, which translates into a secondary that can take away the deep ball and sit on routes. The 31-21 final score doesn’t tell the entire story here, because St. Louis (without Sam Bradford in the lineup) beat up on a team that just won 62-7 last week.

5. No Tebow hype this week: The Broncos’ QB took seven sacks, fumbled three times and threw a pick in the 45-10 loss at home vs. the Lions. His final numbers: 18-39 for 172-yards and a late TD pass. Here’s the problem with Tebow: a lack of consistency. You have to get consistency from your QB to win in this league. I talked up the comeback last week in the win over Miami, because I can’t deny the ability he showed to make the plays late in that game. However, I saw an offense that looked stale, couldn’t sustain drives, convert on third downs or produce points on Sunday. And that falls on the QB position. Some bad football from Tebow. Now, let’s see what he can offer next week out in Oakland.