Now do you believe in the Detroit Lions?

The Detroit Lions are 5-0 after their 24-13 on Monday night at Ford Field in Detroit. Can we call them a legit squad now? No question from my perspective after watching them win (consistently) on both sides of the ball vs. Lovie Smith’s squad.

Let’s break this down: three reasons why Detroit was able to handle the Bears on Monday Night Football. 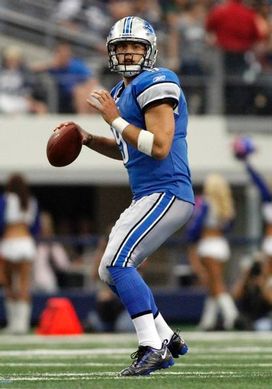 1. Attacked the Cover 2 scheme: Here’s the thing with the Cover 2 (or Tampa 2) defense—it is all technique based. QB Matthew Stafford took advantage of that. Let’s take a look at his two TD passes…

- Calvin Johnson gets a free release off the line of scrimmage and works safety Chris Harris at the top of the route scheme. The Lions run what I call the “Shake 7” (stem to corner route, break back to the post) and Harris can't open his hips to break back to the middle of the field. And when that happens vs. an elite talent like Johnson, it is going to result in a big play. Goes for a 73-yard TD—on a 3rd and long situation.

- Cover 2 in the red zone. I’ve written about this before at the NFP, because this scheme can be a nightmare inside of the 20-yard vs. play action. Detroit targets MLB Brian Urlacher, uses counter protection with the run fake and gets TE Brandon Pettigrew open up the seam. The safety isn’t going to make that play and when the MLB takes a step towards the line of scrimmage (and puts his eyes in the backfield), it is an easy throw for the QB to put six on the board. That's all game planning from the Lions.

2. Physical up front: We need to give Bears’ QB Jay Cutler some serious credit here for finding a way to move this offense when he was consistently hit and flushed out of the pocket, but this is all about the Lions’ front four. The reason they play with that “Wide 9” technique with their defensive ends is to win on the edge and use speed to beat technique on a consistent basis. Plus, the interior of the D-Line had a solid push for the majority of the night. Detroit physically whipped Chicago up front. Suh, Vanden Bosch, etc. They all came to play.

3. Big plays in the run game: Look at Jahvid Best’s stat line here: 12 carries for 163-yards and a TD. Break down the Lions offensively and you are looking at the spread system. They get the ball to Best out of the gun (run the inside and outside zone) and let him press the line of scrimmage. The Bears wanted to play with a 7-man front vs. the run, but even when they dropped a safety in the box, Best was still able to find running room. Chicago did a poor job of gap assignment, however don’t let that take away from the numbers. Best can fly when he gets vertical up the field and hits the second level of the defense. I was impressed.