On Christmas, Finley is the matchup issue for Bears

In their first meeting this season at Soldier Field, Packers’ TE Jermichael Finley caught three TDs from QB Aaron Rodgers in the Green Bay’s 27-17 win over the Bears. Should we expect more of the same on Christmas night up at Lambeau?

Talking with Aaron Nagler from CheeseheadTV.com, we both agreed that Finley could once again be the top target for Rodgers on Sunday. The TE is a true matchup issue for the Bears’ when we look at the X’s and O’s of Lovie Smith’s playbook.

Today, let’s take a look at the Bears top defensive schemes, breakdown the matchups and discuss the issues Finley can bring to the table... 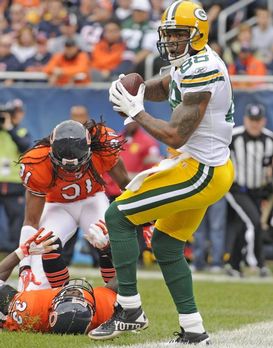 On Christmas night, Jermichael Finely could cause some matchup issues vs. the Bears' defense.

Cover 1 (man-free): The Bears have shown more Cover 1 and Under 10 (FS rolls down to weak side) in their game plans this season. The issue here is the safety position in Chicago. Craig Steltz has played some good football the last two weeks, but when we talk about the size, speed and route running ability of Finley, this is a matchup that favors Green Bay. Look for situations when the Packers remove Finley from the core of the formation (think backside X receiver, in the slot, bunch, etc). Working vs. press or off-man, Finley should be able to get vertical in the route tree and create separation on inside breaking routes vs. Steltz. And you could see Lovie put free safety Brandon Meriweather over Finley if he produces early.

Cover 2 (Tampa 2): The way I see it, Cover 2 is the smart play vs. Rodgers and the Packers. Rush four, drop seven and limit the vertical threats down the field. Force the Packers’ QB to play check down football. However, you still have to account for the Mike Backer (middle linebacker) running the inside vertical seam. This creates a matchup of Finley vs. Brian Urlacher down the middle of the field. Speed vs. the technique of Urlacher on the post and seam routes. And don’t forget about the red zone. Quick reads from Rodgers and the use of play action to impact the run/pass keys of Urlacher. This will be tough on the Bears’ LB (and he will need some help from his front four rush) to limit Finley when Chicago plays Cover 2.

Zone/Man pressure: The Bears will use some man-pressure, but I expect to see more zone blitz concepts on Sunday out their base and Nickel personnel. In Chicago’s zone pressure schemes, they will rush five and drop six into coverage. Show Cover 2, stem to the blitz front and force Rodgers to throw hot with zone coverage principles in the backend (three-deep, three-under). The key vs. Finley is the play of the seam-flat defenders (responsible for No.2 strong and weak). When Rodgers reads blitz at the line of scrimmage drive downhill, maintain leverage and tackle vs. the Packers’ TE in the open field. You can’t sit in Cover 2 the entire night and you have to show some form of pressure. The routes to look for here: slant, option, quick seam, 7 (corner).

Let’s see how this plays out on Christmas night. Primetime stage at Lambeau for a player that could cause some major problems for the Bears’ defense.