Click here for the previous “All-22” breakdown: Andrew Luck’s pass to beat the Packers.

Let’s talk play action football and take a look at Wes Welker’s TD catch vs. the Broncos from this past Sunday. A solid example of how run action can force defensive backs to stick their eyes in the backfield and lose coverage in the secondary. And with Tom Brady and New England, there is always plenty to focus on within their offensive scheme.

- I want to start with the play action. The open (weak) side guard (highlighted in orange) will pull to the closed side of the formation. This is called “counter protection.” And if you have second level defenders ignoring their run/pass keys (High Hat=Pass, Low Hat=run), this looks like a one-back power scheme.

- To the closed side of the formation, WR Brandon Lloyd will take a hard inside release and stem to the post. On the open side, this is the “Pin” concept that we see from the Patriots out of multiple personnel groupings and alignments. A Dig (square-in)-Option combo. The No.1 WR will work vertically up the field and break on the deep dig with No.2 (Welker) running the underneath option route.

-The Broncos are playing man-free with a deep middle of the field safety. Play with outside leverage and funnel receivers back to your safety help. Nothing complicated here. Read the release of the WR and maintain your leverage throughout the route stem. 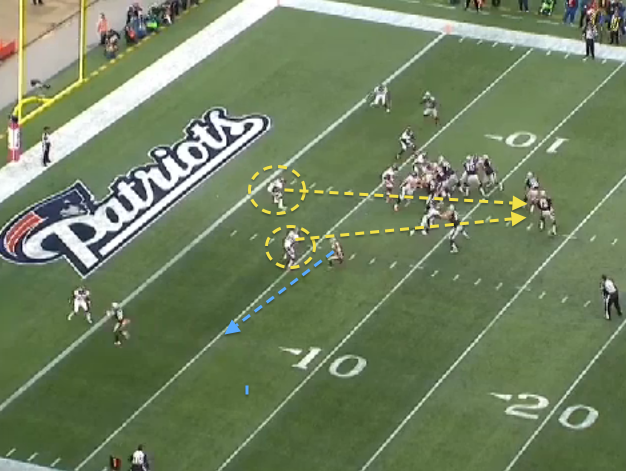 - “Eyes.” I talk about it often when breaking down DB play and this is no different. Both the FS and nickel back, Chris Harris, are looking in the backfield. You can’t get away with that vs. Brady. Take your eyes off the coverage (step to the line of scrimmage) and the WR will create separation.

- Focus on the initial stem here from Welker. When I was watching the tape, the angle Welker takes can be seen as a run read. In the slot, the WR will work to clear out the nickel on run action away. Add that to Harris’ bad eye placement and Welker has now gained leverage to break back to the numbers. 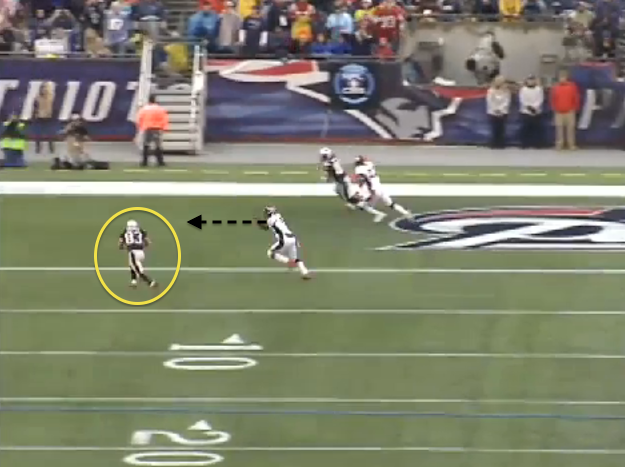 - End zone angle of Welker on the catch. As you can see, Harris is stuck in a trail position and has no chance to recover. This is too easy for Brady to look to the play pass side of the formation and come back to Welker.

- Whenever you study play action, focus on the secondary. Are they reading their run/pass keys? What about their leverage? Where is their help? Any false steps? In this case, the Patriots set up the Broncos using “counter protection” and closed side run action. And if you don’t play the technique of the defense vs. Brady it will lead to points.