Last week I talked about inside zone pressure (“A” gap pressure) out of the Ruby front (3DL-2LB-6DBs). Today, let’s get back to the base 4-3 defense, draw up another fire zone and get the secondary (SS) involved in the blitz front.

Take a look at “Under Snake Fire Zone” up on the chalkboard and then we will breakdown how to rush five, drop six into coverage and bring closed (strong) side pressure on the QB. 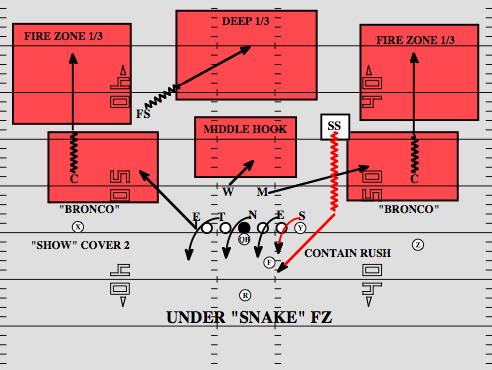 Fire zone basics: In most of the fire zones I draw up, the coverage aspect is similar in the secondary. By rushing five, we are creating a 3-deep, 3-under shell. Both CBs will play outside “Fire Zone 1/3” technique (match to No.1 vertical) with the FS playing the deep middle 1/3 of the field. Underneath, both the Mike Backer (M) and open (weak) side DE will play the “seam-flat” (or “Bronco” technique) and match to No.2 with the Will Backer (W) dropping to the “middle hook” (match to No.3).

Show Cover 2: I like showing a 2-deep shell in the secondary when running a base fire zone. Both CBs will align in a press-look (“bail” at the snap”) with the FS and SS aligning at depth of 10-15 yards. Defenses will time the QB (during film study) when he puts his hands under center. Based on the amount of time you have, the SS will stem to the blitz front with the FS working back to the middle of the field. Show Cover 2 and roll to a 3-deep alignment.

The Blitz: Only rushing five here, so creating some confusion is key to beating the protection scheme. With an “Under” front (Nose to the closed side of the formation), the open side tackle will “scoop” to a contain rush with the Nose and closed side DE working to opposite gaps. The Sam Backer (S) will slant to the “C” gap allowing the SS to rush off the edge (contain principles).

Try to steal one: This blitz isn’t guaranteed to get home if the QB throws the quick 3-step game. Because of that, you have to coach up your “Bronco” defenders (open side DE and Mike) to play for the “hot read” (slant). Drop into the throwing lane with your eyes on the QB and go make the play.