A couple of weeks back I broke down the Packers’ “Pin” route (Post-In) vs. the Texans. One of the top Cover 4 beaters as it forces the safety to drive the dig route while leaving the CB in a one-on-one situation vs. the post from an outside leverage position.

On Sunday night in Denver, Peyton Manning and the Broncos ran another classic Cover 4 beater vs. the Saints: “Dino” Double Post. A concept that once again occupies the safety and puts stress on the CB to play a deep inside breaking route.

Let’s take a look at the play using the All-22 tape and get into some coaching points. 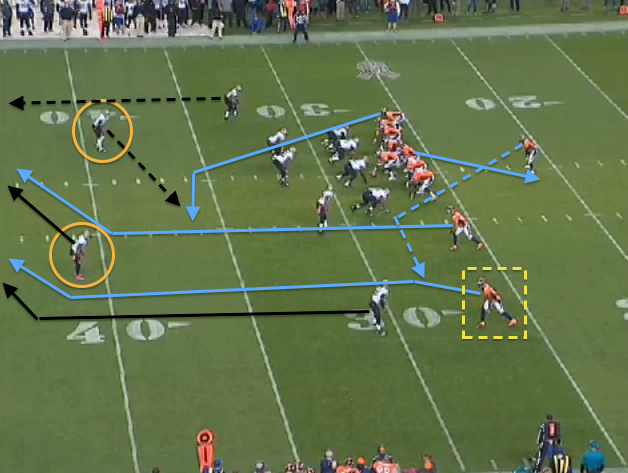 -I want to start to the closed side of the formation. Because of the “wing” alignment, the Saints are using a “cut” call. SS Roman Harper will drive the intermediate crosser from the No.1 receiver (TE) with the CB sinking down the field and looking to help to the open side. A call that is communicated before the snap and you will often see it vs. a backside X receiver in a “nasty” split close to the core of the formation.

- To the slot (or open) side of the formation, the Saints are playing their Cover 4 technique. CB Patrick Robinson will match to No.1 (Demaryius Thomas) with FS Malcolm Jenkins playing No.2 (Eric Decker). The rule for Jenkins is simple: play No.2 vertical past a depth of 12-yards.

- Manning wants to target Thomas after the receiver uses the “Dino” stem (stem to corner, break to post). Create some separation back to the middle of the field. 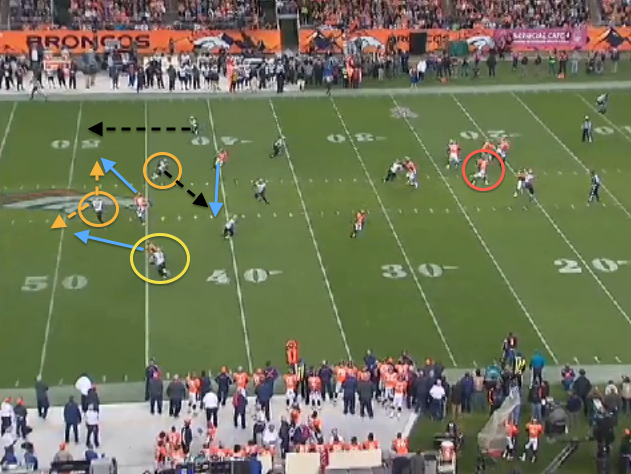 - Real tough spot for Robinson. If he gets caught in a trail position, the CB is stuck (low and to the outside) vs. a route breaking back to the deep middle of the field with no safety help.

- Can Jenkins help vs. Thomas? In Cover 1 or Cover 3, the FS is taught to “split” both post routes. Drive downhill on the inside post or use an “open angle” technique (hips open to the QB) and “wheel” to the deep post. From my experience, it is one of the toughest techniques for a deep middle of the field defender. Here, Jenkins has to carry Decker on the inside post in Cover 4 and can only wheel back to Thomas on the throw. Even with the open side CB sinking, you can’t leave early and give Manning the option of targeting Decker. This is on Robsinson to work through the stem from Thomas and play the ball. Not easy. 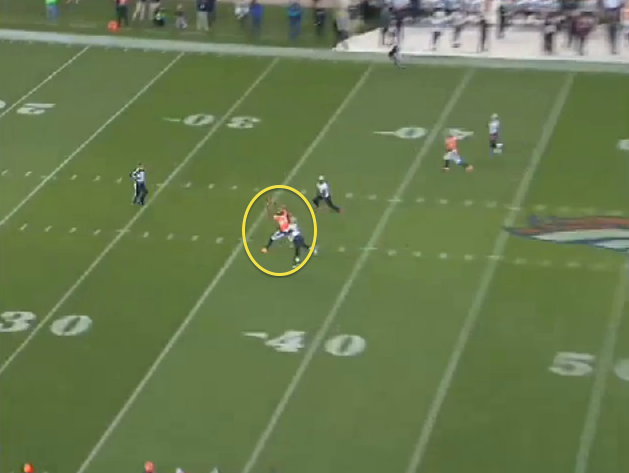 - Look at the ball placement here from the Broncos’ QB and the finish from Thomas. High and to the upfield shoulder. Put the ball away from the defender and let the WR make the catch.

- The Broncos had the right call for the coverage. That happens. And when Jenkins drove the inside post, Manning had the matchup he wanted for an explosive gain: Thomas on the “Dino” stem.