Click here for my breakdown of the base NFL run game.

On Sunday, Chris Johnson filled up the box score with 195-yards rushing and 2 TDs in the Titans’ 35-34 win over the Bills. The RB was patient with the ball, used his vision to find cut back lanes and displayed the top-end speed we are all accustomed to seeing in his game. 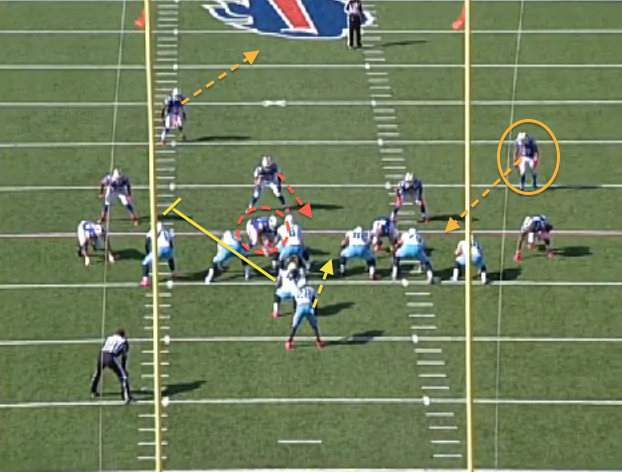 - Start with the defensive look from Buffalo. A 4-3 “Over” front (Nose shaded to the open side of the formation) with SS George Wilson (orange) walked down the closed (strong) side and filling the “C” gap on the run. An eight man-front (Cover 1) with the FS playing the deep middle of the field.

- This is a base Inside Zone scheme from the Titans with a “Bim” block (FB blocks away from run action). When the RB steps to the closed side of the formation, FB Quinn Johnson will work to the second level and block Will LB Nick Barnett.

- The Titans are going to double down on Marcell Dareus (red) with the LG working up to the Mike Backer once he steps to the play side. 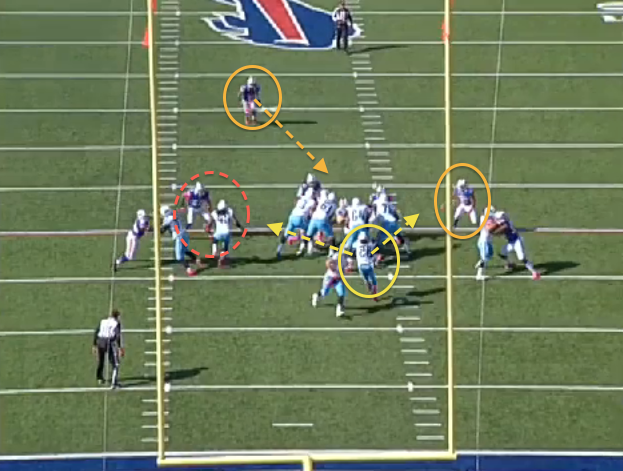 - Vision. On any “zone” scheme, you want to see the RB find the cut-back lanes. With Wilson showing to the closed side “C” gap and Dareus getting washed down hard inside, the Titans’ RB is going to scan to the open side and look for a running lane. Show some patience, let the blocks develop and then get up the field. 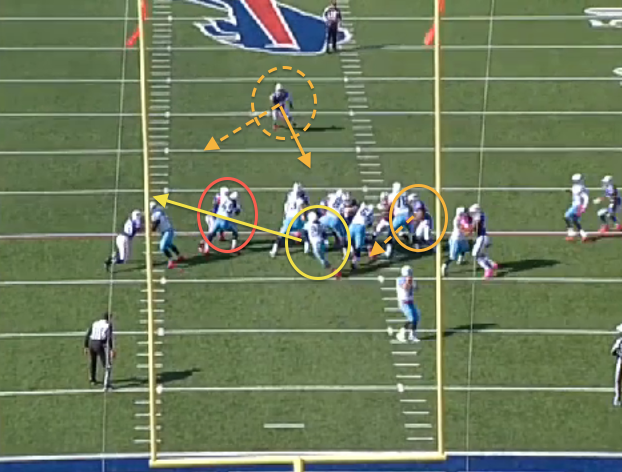 - The Titans have this blocked up. The FB fits on the Will, the LG works up the Mike Backer and the LT turns out the open side defensive end.

- The Bills need their FS, Jairus Byrd (orange), to take the proper angle and make an open field tackle. However, Byrd wants to drive straight downhill and enter the run front. As a FS, you must keep your depth. Remember, you are a “secondary” run defender and have to give yourself enough room to take an angle that allows you to make the tackle. Get the ball carrier on the ground and live to see another down. That’s your job. 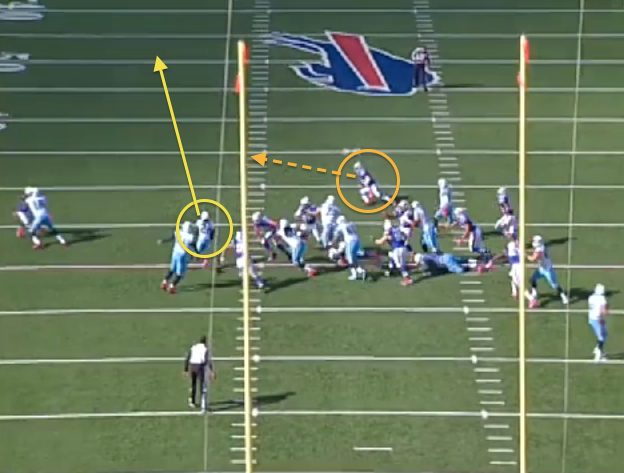 - Look at Byrd here. There is no need for the FS to be down near the box in this situation. Because he doesn’t have depth when this ball breaks, Byrd now has to take a flat angle vs. the vertical speed of Johnson. That’s bad football. As I said above, give yourself room, take a 45-degree angle, come to balance and make the play. 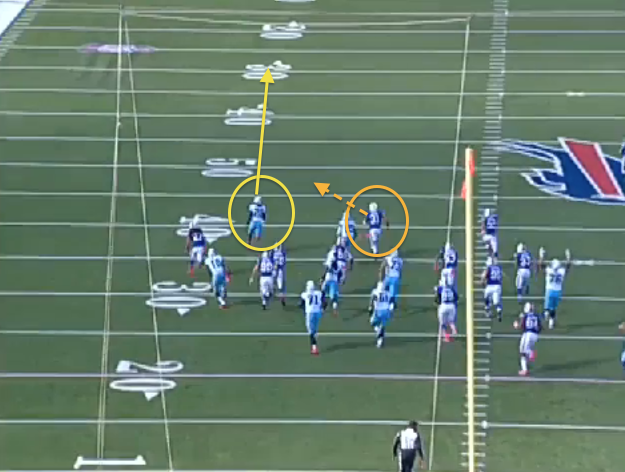 - Go back to a couple of quick points. The Bills had this run fitted up to the closed side of the formation and that forced Johnson to cut back. Could Wilson "shoot" through the "C" gap and make this play? Maybe, but I'm not concerned about the play side here--because they did their job. However, with Barnett unable to defeat the block of Quinn Johnson, Dareus getting washed inside on the double (which allowed the LG to work up to the Mike) and the poor angle from the FS, all the Titans’ RB had to do was find a lane and turn on the speed.