Last weekend, I wrote up my defensive notes on Jon Gruden’s game plan. Various route schemes, offensive tendencies, the run game, red zone, etc. An inside look at the call sheet of the former Bucs’ head coach when I was playing for the Redskins.

Today, I want to talk about one of Gruden’s top play action schemes: “Yankee.” A two-man vertical concept (with max protection) the Bucs would use when the ball was between the 40s (prime field position for deep play action).

Check out the diagram up on the chalkboard and then we will breakdown how to defend the route playing Cover 2 in the secondary. 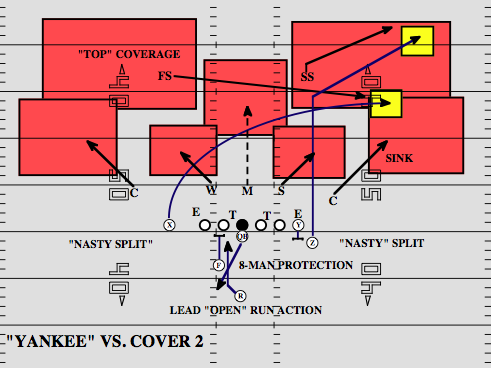 Route breakdown: As I said above, this is a two-man route with max (8-Man) protection. Use Lead “Open” run action (to force the LBs to step to the line of scrimmage) and run the Z on the 7 cut (corner route) with the X on the deep crosser. We called it a “Yankee” in Washington, but I’ve also heard it described as the “Cross-Country Speedo” from a different coaching staff.

WR Splits: Both WRs to the closed (strong) and open (weak) side of the formation are aligned in “nasty” splits (tight to the core of the formation). Why? The Z is creating room to run the 7 and the X is shortening his split to work back across the field. However, Gruden wants to create a false run key based on those pre-snap splits (crack block alignments). Use run action and try to catch a safety sticking his eyes in the backfield.

Defeating Cover 2: Working vs. 2-deep coverage, the concept is designed to run off the SS (7 route) and target the deep crosser. Because of the WR splits, the CB is playing a “soft squat” technique (no jam, sink at the snap). And if he doesn’t get enough depth on his drop, the QB can hit the deep crossing route over the top of the CB for an explosive gain.

How do you defend it?

Both safeties in Cover 2 are coached to drop to a landmark (top of the numbers). But with the initial splits of the WRs, they will tighten their alignment (inside of the No.1 WRs) and “top” their coverage (must alert “Yankee” before the snap). The SS has to stay deep enough to play the 7 route with the FS driving (top down) on the underneath crosser (no vertical threat to open side of formation). Similar to a “push” call in Cover 4.

An adjustment we made on Monday—in film session—after we were beat on this concept.