Playbook: Defending the 'boot' in Cover 2

Click here for a breakdown of the “boot” game in the NFL.

Watching the Bears practice down at camp, Mike Tice’s offense is using the boot game out of Ace (2WR-2TE-1RB) and Posse (3WR-1TE-1RB). Get QB Jay Cutler outside the pocket with multiple options in the passing game vs. Cover 2 (or Tampa 2). Target the 9 route (or comeback) with the Z receiver or hit the intermediate crossing route.

Today, let’s look at the concept up on the chalkboard and breakdown how you defend the route (and “slow play”) the intermediate crosser in Cover 2. 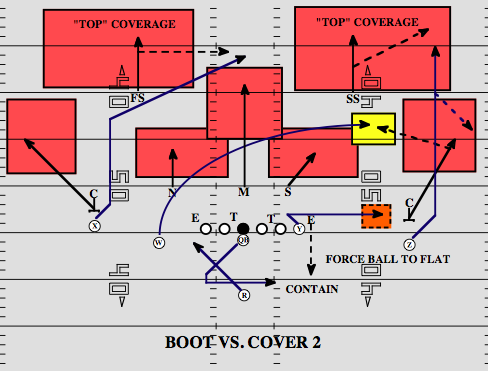 - Start with the closed side DE, because you need discipline here. If the DE can stay up the field (instead of crashing hard on play action), you can force the QB to pull up, unload the ball to the flat (Y) and rally to make the tackle. This is where you want the ball to go from a defensive perspective.

- Read "High Hat" (pass) vs. "Low Hat" (run). On boot action, the offensive line will turn and march (called “Elephants Marching”). This is a pass read. Don’t attack the line of scrimmage or stick your eyes in the backfield.

- Both safeties in the deep half will “top” their coverage (similar to playing the “Yankee” route in Cover 2). Read the release, play with depth and drive to the receiver. A quick tip: don’t assume the ball is going underneath.

- The closed side CB is the key. With the Z aligned outside of the numbers and taking a wide release (equals two routes: Fade or Comeback), the CB can still re-route and sink (play underneath the comeback, force ball to the Flat). However, he can also “slow play” the crossing route (sit, drive on the throw).

- In Cover 2, always coach your CBs to use a "zone turn" (back to the sideline) and look inside after the intial re-route. Too often, CBs will widen and allow the QB to hit the crossing route for a positive gain that will move the sticks.