On Sunday night, Drew Brees hit WR Devery Henderson on the double-move (Out and Up) to break the record of QB Johnny Unitas for consecutive games with a TD pass. Today, let’s go back to the “All-22” tape, look at the route scheme, focus on the 5-Man zone pressure from San Diego and get into some coaching points. 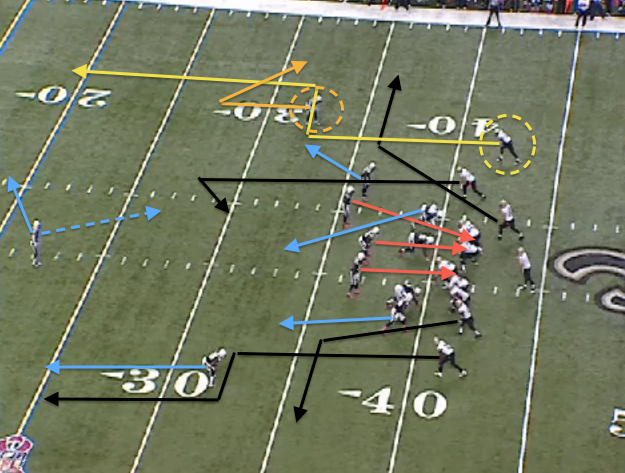 -3rd and six situation for the Saints with the No.1 WRs aligned inside of the numbers. From a defensive perspective, play for a Hi-Lo concept or a quick outside breaking route.

- Let’s start with the pressure scheme from the Chargers. Just like the base zone blitzes we see across the NFL, San Diego is rushing five and dropping six into coverage. A 3-deep, 3-under shell with two “seam-flat” defenders and a “middle hook” player. In the backend, both CBs will use “Fire Zone 1/3” technique (match to No.1 vertical) with the FS, Eric Weddle, playing the deep middle of the field.

- Double flat routes from the Saints with the No.2 WR to the closed (strong) side of the formation running the deep inside curl. On the outside, Henderson (highlighted in yellow) and Marques Colston (No.1 to the open side) will stem up the field, cut to the out and then work vertically over the top.

- The issue is the technique, eyes and false read from CB Quentin Jammer (highlighted in orange) vs. the double-move. 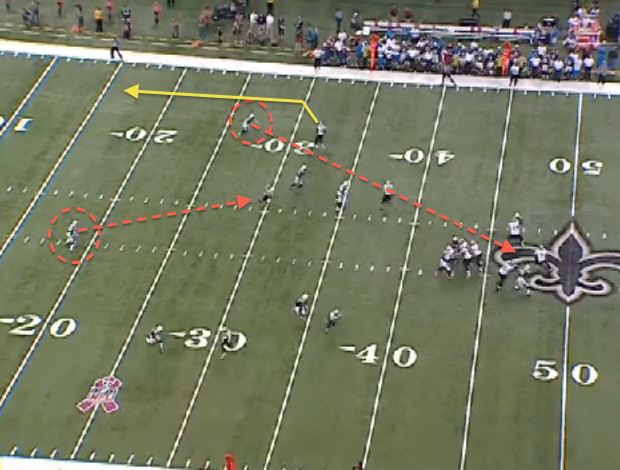 - Look at the eye placement here from Jammer. He is playing from an off-man position and has enough cushion on top of Henderson to work through the double-move. However, when you stare down the QB it will lead to an explosive play. Remember, “eyes” are the top reason DBs get beat vs. the double-move.

- There is a bust underneath from the Chargers. Both the closed side “seam-flat” defender and the “middle-hook” player match to the TE in the flat. With no one carrying No.2 vertically up the field, Weddle will break downhill to play the curl. That leaves Jammer all alone vs. Henderson. 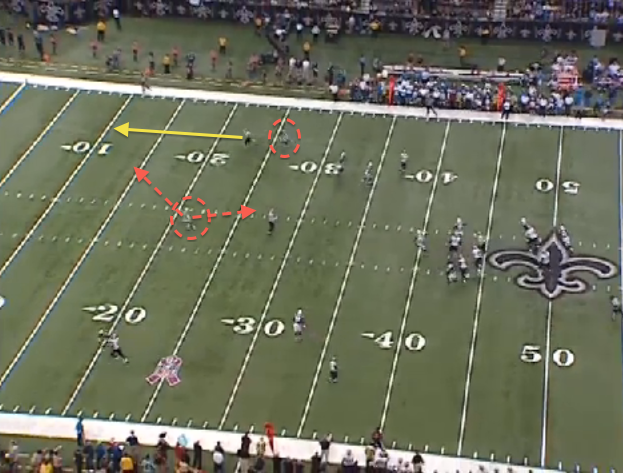 -I wanted to show you Jammer in a trail position (before the ball is even thrown) and the depth of Weddle. Jammer can’t recover after breaking on the out. And with Weddle taking a downhill angle, Brees can step up in the pocket to target Henderson. 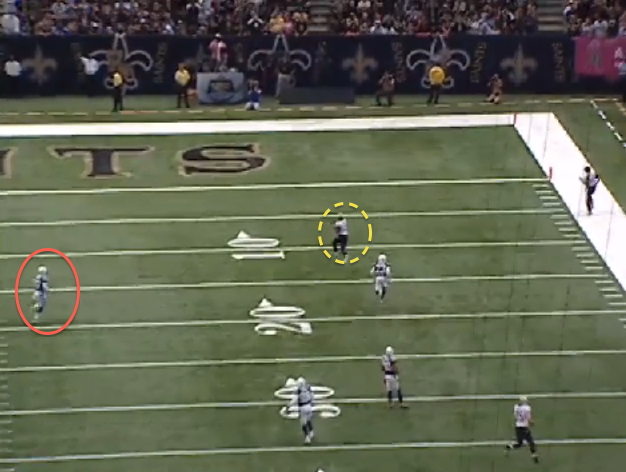 -One last shot with the end zone angle. Henderson can walk in for six. Smart play call from New Orleans on a 3rd and medium situation to take advantage of a CB playing (and guessing) for the ball to come out quickly in a pressure scheme.