Playbook: Falcons put on a clinic vs. Cover 2

Watching the Rams-Cardinals game on Thursday night, I saw a lot of Cover 2 from St. Louis in the red zone. How do you beat it? Let’s go back to the Falcons' win over the Panthers this past Sunday and breakdown Matt Ryan’s TD pass to Roddy White. A solid example of how personnel, alingment and route scheme can beat the 2-deep shell.

Check out the “All-22” cut-ups and then we will get into some coaching points. 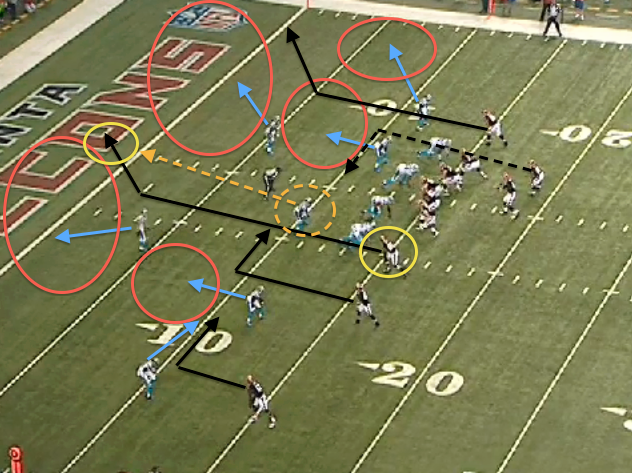 - I want to start with the personnel and alignment before we get to the Falcons’ route concept because it tells a story. In a “Dakota” formation (TE removed as backside X receiver in 3x1 alignment), you can get speed down the middle of the field. Look at the pre-snap alignment of White (highlighted in yellow). He is the No.3 to the open side of the formation—and that allows him to matchup vs. the Mike Backer (highlighted in orange) on the post.

- The route is a classic Cover 2 beater. A 7 (corner) route to the closed side of the formation from TE Tony Gonzalez (occupy the SS) and two inside smash routes from No.1 and No.2 to the open side. That leaves White on the post down the middle of the field.

- Base Cover 2 from the Panthers. Rush four, drop seven into coverage. Two deep safeties with the Mike Backer running the “inside vertical seam.” 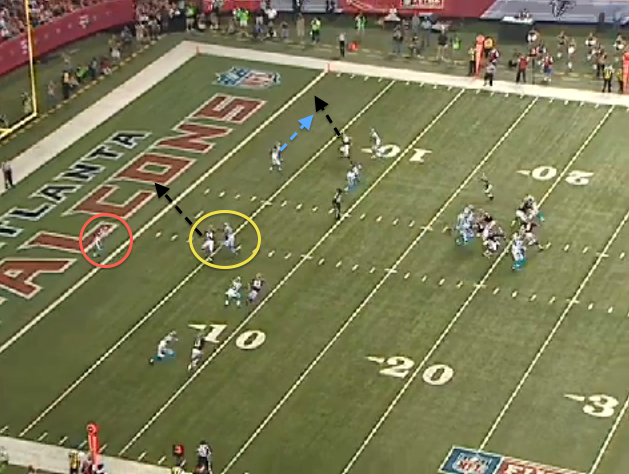 - The Falcons have the matchup they want: White on the post vs. a Mike Backer in the middle of the field. The LB will open his hips to the passing strength (open side of formation) and carry the inside vertical.

- I mentioned the 7 cut from Gonzalez above. This occupies SS Charles Godfrey and prevents him from overlapping to the middle of the field on the throw.

- Keep an eye on FS Haruki Nakamura (highlighted in red). He isn’t threatened vertically by No.1 or No.2, so he should be in a position to drive downhill on this throw. 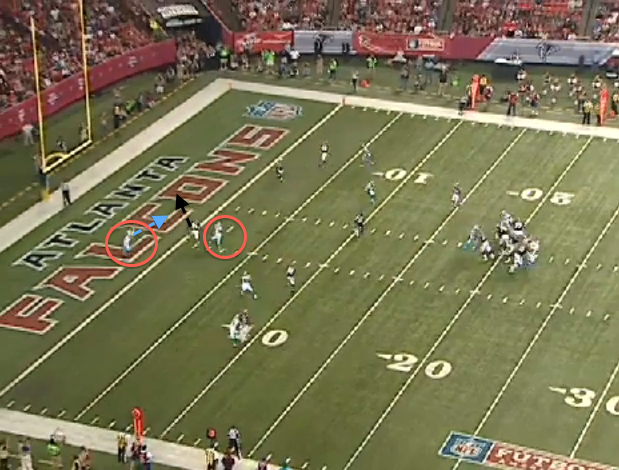 - Now you start to see the separation from White once he stems to the post. Remember the Mike LB has his back to the QB. He has to drive to the inside hip of the WR and roll to the post. Not an easy technique when matched up the speed of the Falcons’ wide out.

- Check out Nakamura. As a Cover 2 safety in the red zone, you have to play for the 8 (post) or the 7 (corner) and you can’t take any false steps (or be slow in your read). The speed of the game increases in the red zone. 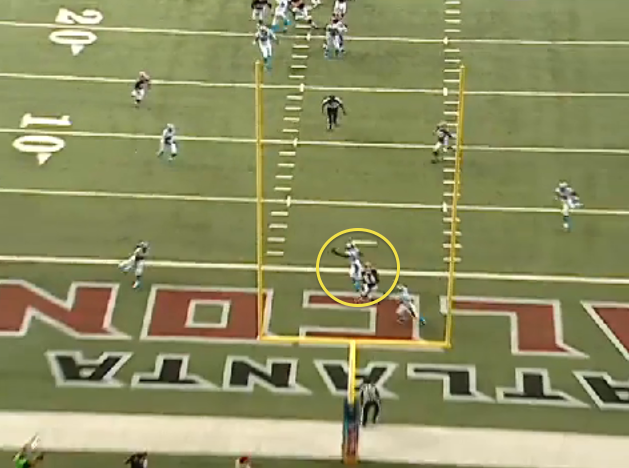 - End zone angle of the catch. Even with the Mike Backer trailing White (and the FS slow on his break) this is a very tight window for Ryan to target the WR. Great throw and execution on this play. And it all started with the pre-snap alignment of the Falcons.