Playbook: How do you defend the 'Hail Mary?'

The “Hail Mary.” Line up in a “Big Ben” formation and take a shot at the end zone. But how do you defend the concept from a defensive perspective and protect yourself from giving up a free score?

Today, I want to breakdown “Utah Press” vs. the “Hail Mary” and discuss the techniques required to knock this ball down and head to the locker room. Take a look at the chalkboard diagram I drew up and then we will get into some coaching points. 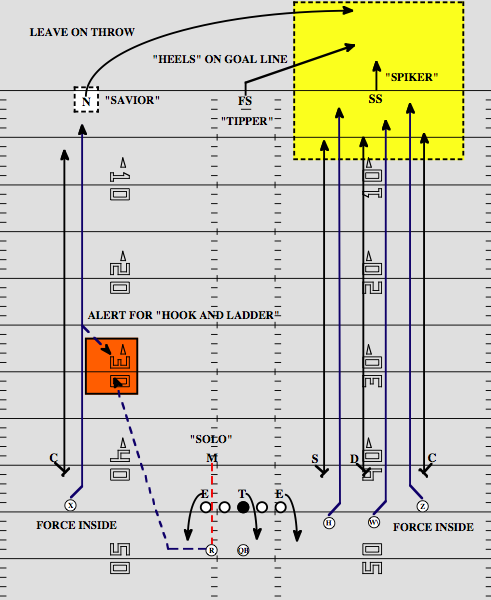 Contain rush: With only a 3-man rush, containment is key. I have both defensive ends rushing with outside contain principles to keep the QB in the pocket. Allow the QB to escape (and extend this play) and you are looking at “sandlot” football where anything can happen. Force the QB to throw this ball from within the tackle box.

Underneath press defenders: You want to get something on these receivers at the line of scrimmage and impact the release. To the closed (strong) side of the formation, you also want to “bunch” the receivers together. The CB will force an inside release with both the Sam and Dime forcing an outside release. After the initial jam, the underneath defenders will play in a trail-position (similar to 2-Man).

The Spiker: The SS is the point man vs. the “Hail Mary.” Coach him up to play the ball at the highest point and “spike” it into the ground (two hands on the point of the ball). Forget about the interception here. That leads to trouble.

The Tipper: The FS will track the ball and play for any deflection. Read the QB and leave on the throw with an angle that puts you in a position to make a play on the ball.

Backside “hook and ladder” alert: The Mike Backer (M) is locked on the RB in “solo” coverage—but don’t fall asleep here. You always have to alert for a possible “hook and ladder” with the backside X receiver running the 15-yard curl and pitching the ball to the RB.

Why are DBs taught to “spike” the ball?

Coaches don’t want to see a DB go for the ball and tip it up into the air. Instead of trying to pad your stats, drive the ball into the ground (with the proper technique) and get off the field. It sound easy to just teach the DB to make the play, but if you don’t bring it in that ball can land anywhere.

What is the main issue defending the “Hail Mary?”

You don’t practice it at full speed. NFL clubs will “jog” through “Utah Press” during Saturday practice (with the offense stopping around the 10-yard line). Coaches will remind everyone to avoid collisions and allow the defense to spike the ball into the ground. However, come game time, this is a full speed play that often times turns into a scene you would see on an elementary school playground.