When I look at the skill positions on the offensive side of the ball in New Orleans, I have trouble trying to come up with coverages/schemes/blitz fronts to matchup to their multiple weapons. And when the ball is in the red zone, one of those players that creates consistent issues for a defensive game plan is Darren Sproles. Whether aligned within the core of the formation or removed as a WR, the Saints RB can beat the majority of safeties and LBs in this league because of his skill set and lateral ability.

Two routes that I would focus on: the RB “option” and “angle” inside of the 10-yard line. A quick, easy read for QB Drew Brees once Sproles plays off the leverage of the defender. A solution? I’m looking at playing Cover 7 (combination-man) with a “Boston” call vs. Sproles. (2-on-1 with FS and LB).

Check out the two diagrams I drew up on the chalkboard and then we will break down some coaching points. 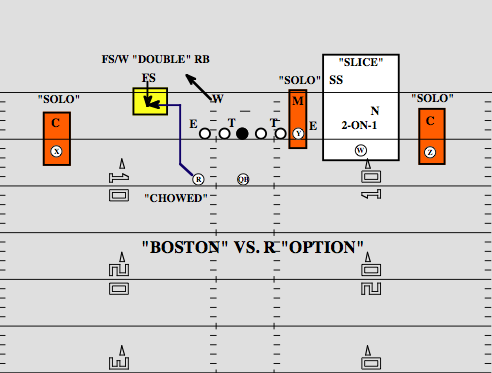 - With a “Boston” call, I am playing 2-on-1 vs. Sproles with the FS and the Will LB (W) to the open (weak) side of the formation. Force Brees to go elsewhere with the ball and take the RB out of the play.

- Check out the alignment I have Sproles in. This is called a “Chowed” position (outside leg of the tackle). This is an offensive tendency that the RB is going to release into the route scheme.

- On your base “option” route, Sproles will work up the field and play off the leverage of the Will. With the LB sitting to the inside, you want to force the RB to break to the numbers—with the FS waiting to drive downhill.

- The Will (or the FS based off the cut of Sproles) has to protect for a double move (called a “Shake” route in the red zone). You want the FS in this situation to “jump” the option, so coach up the Will to take an angle that allow him to play a vertical stem. 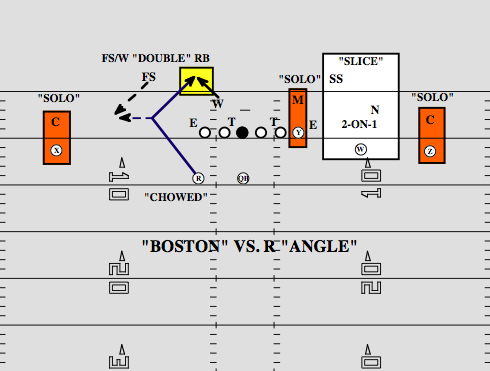 - Same “Boston” call here—this time playing for the angle route. A tough route to defend in man-coverage because defenders will often over-run the initial stem of the RB (and open their hips), leaving a clear path to work back inside of the numbers.

- Again, you want to be aggressive. The FS should expect to drive on any outside breaking cut with the Will protecting to the inside.

- We can call this a “bracket” coverage. The Will sits hard to the inside and plays for the angle. A true 2-on-1 look.

- Where can you get in trouble? Think of the RB “Rail” (or inside seam). I’ve been beat as a safety playing this same call and looking for an outside cut—only to see the RB take this route vertical. The FS and Will can get split in this situation.

What else is going on here in Cover 7?

- As I have said before, if you are going to focus on “doubling” a player, then the you will have to put some defenders in adverse situations. No such thing as a “perfect” coverage (can play it safe and call Cover 2).

- I have both CBs and the Mike Backer (vs. TE Jimmy Graham) playing a “solo” technique (highlighted in orange). Think Cover 0 (blitz-man with no help). They are on their own to play with inside leverage and man-up.

- To the closed (strong) side of the formation, I am going to double or use a “Slice” technique (highlighted in white) on the No.2 WR in the slot (W). Same principles as a “Boston” call, the SS will take the first inside cut with the Nickel (N) playing the first outside cut.