Down 27-22 with under a minute to go on Sunday, the Colts and QB Andrew Luck brought Posse personnel (3WR-1TE-1RB) on the field inside of the 5-yard line. The route: a man-coverage beater (one-step slant with a “rub” release) out of a “stack” alignment to target WR Reggie Wayne. Today, let’s use the “All-22” tape to talk alignments, route scheme and DB technique on the play that gave Indy the upset win over Green Bay. 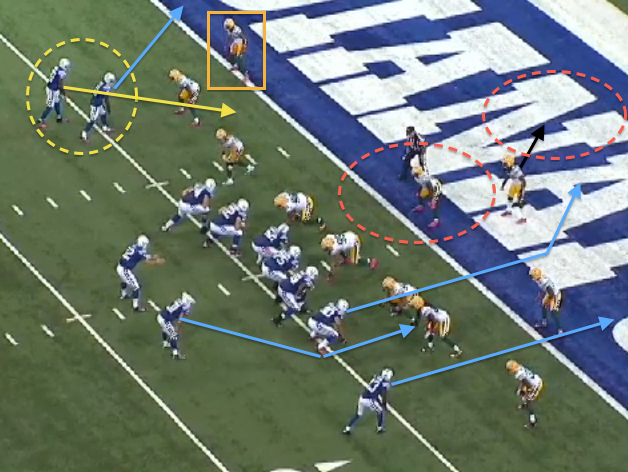 - Let’s start with the defensive look. The Packers are playing Cover 1 “Rover.” Think “man-free” with the Mike Backer playing the inside “hole” and the FS in the deep middle of the field. A coverage you will see in the red zone (or 3rd and 2-6 situations) to take away inside breaking routes (Slant, Hi-Lo). DBs are taught to play with an outside shade and funnel receivers to their help in the middle of the field.

- This is the proper alignment to the open (weak) side of the formation from the Packers. Working vs. a “stack” (highlighted in yellow), you never want to see two DBs aligned at the same level (easy to get “picked”). With one DB on the ball in a press-alignment, Tramon Williams (highlighted in orange) can play from an off-look.

- Focus on the “stack” release from the Colts. The WR on the ball will take a hard outside stem to run the fade (or corner) with Wayne coming underneath on the “one-step” slant (immediate inside stem). The idea is to impact Williams and force him to “bubble” over the outside release—opening up a clear throwing lane for Luck. 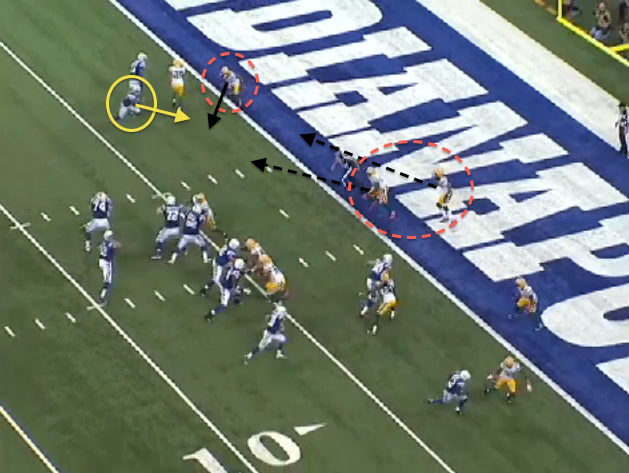 - The technique from Williams is exactly how you coach it up. Because of his pre-snap alignment, the Packers’ CB can use a “flat-foot” read (read through the 3-step) and drive at a downhill 45-degree angle on the slant. Williams doesn’t panic (young DBs want to give ground in the red zone) and puts himself in a position to make the play.

- Where is the inside help from the Mike and FS? Look at Luck in the pocket. No hesitation for the Colts’ QB. This ball is coming out quickly and that will prevent the inside help from stepping into the throwing lane. Remember, down in the red zone the speed of the game increases dramatically. 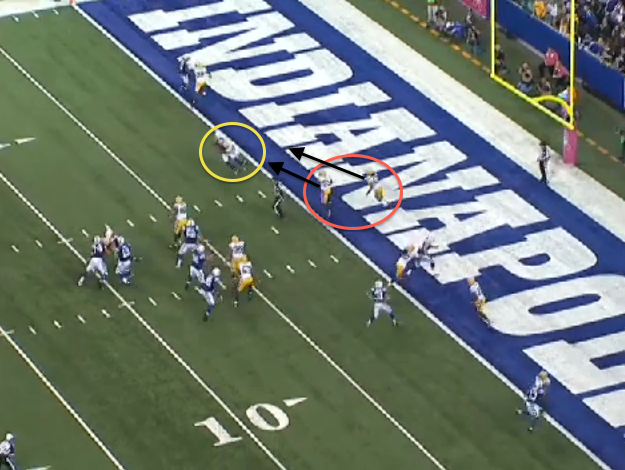 - As we talked about above, Williams is in the proper position. However, with the ball thrown to outside shoulder of Wayne, all the Packers’ CB can do here is secure the tackle and wait for his teammates to help.

-Get him down. That’s what a DB coach would say in this situation. Good throw, good catch. That happens. However, you have to get the ball carrier on the ground here and give yourself a chance on the next play. Outstanding effort from Wayne to put this ball across the goal line giving the Colts the upset win.