Click here to read my playbook breakdowns on the NFP “U” homepage.

Click here for the previous “All-22” breakdown: Sanchez vs. Cover 1 pressure.

Aaron Rodgers threw six TD passes on Sunday night in the Packers’ 42-24 win over the Texans down in Houston. The Green Bay QB hit the 9 (fade) route, the “sluggo” (slant and go), Smash-7, etc. Multiple route combinations where ball placement was key.

Today, let’s go back and take a look at Rodgers’ second TD pass to Jordy Nelson on the “Pin” concept vs. Houston’s Cover 4 (quarters) defense. Check out the “All-22” film cut-ups and then we will get into some coaching points. 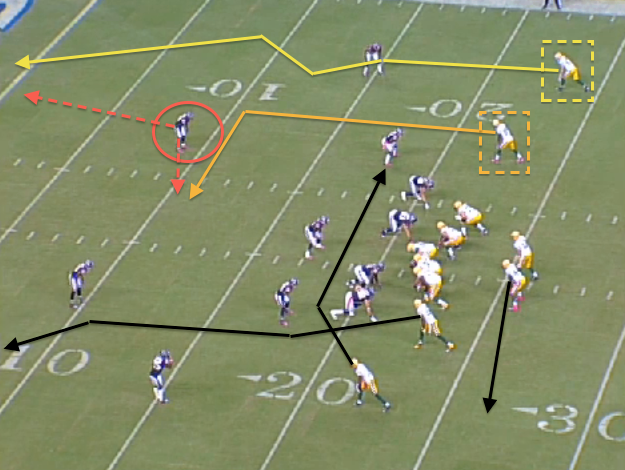 -The “Pin” (Post-In) can also be called “Mills” or “Dino Double Post.” Put stress on the SS and target the CB playing from an outside leverage position. This is exactly what the Packers are doing here to the open side of the formation. Nelson (highlighted in yellow) will use a “Dino” stem (work to the 7 and break back to the post) with No.2, James Jones (highlighted in orange), running the intermediate Dig (square-in).

- Base Cover 4 rules for the SS (highlighted in red): Inside shade on No.2 from a pre-snap alignment. If No.2 runs vertical past a depth of 12-yards, you carry the route. If No.2 runs underneath (Curl, Flat, Crosser, etc.) you look to No.1 and provide inside help vs. the dig or post. Drive to the hip of the WR and then locate the ball.

-Jones breaks his route at (or around) 12-yards. That’s tough on SS Danieal Manning. Drive the dig route or wheel to the post? With speed up the field from Jones, I would do the same thing—drive downhill on the dig.

- To the closed side, this is essentially a Smash-7 (corner) combo with TE Jermichael Finley running the 7 cut and the No.1 WR on the underneath crosser. From my perspective, the Texans are playing a “Zorro” call (in and out) with the CB and FS. When No.2 to the open side clears out underneath, this becomes a “bracket” look vs. Finley on the 7 route (CB plays for the 7, FS cushions inside for a possible post route). 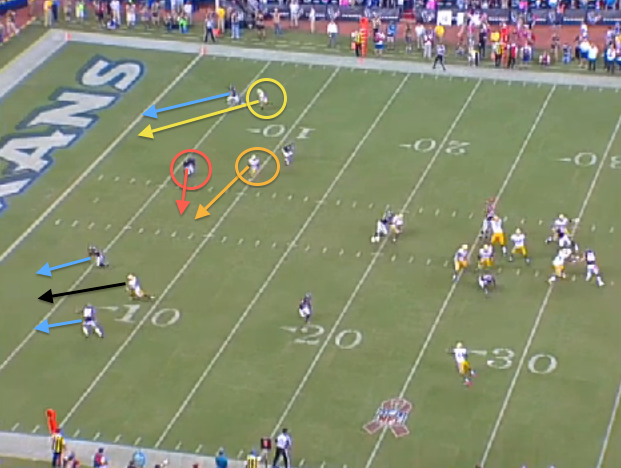 - Check out Texans’ CB Alan Ball once Nelson stems to the post. He is playing the proper technique: upfield shoulder with an outside shade. This is what you want to see from the CB in Cover 4. Maintain your leverage and be in a position to drive to the WR on the throw.

- Inside, Manning is going to break on the dig route. That leaves Ball in a tough spot. Even though he is playing the coached technique of the defense, we are looking at deep inside breaking route vs. a defender with an outside leverage position. 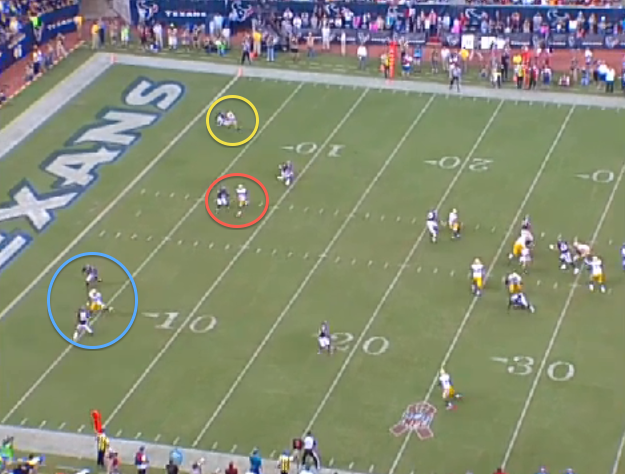 - The ball is out here from Rodgers—and look at the coverage. The Texans have the bracket on Finley, Manning has taken care of the dig route from Jones and Alan Ball has played through a multiple breaking route (from an off-man position) vs. Nelson. That’s not easy. 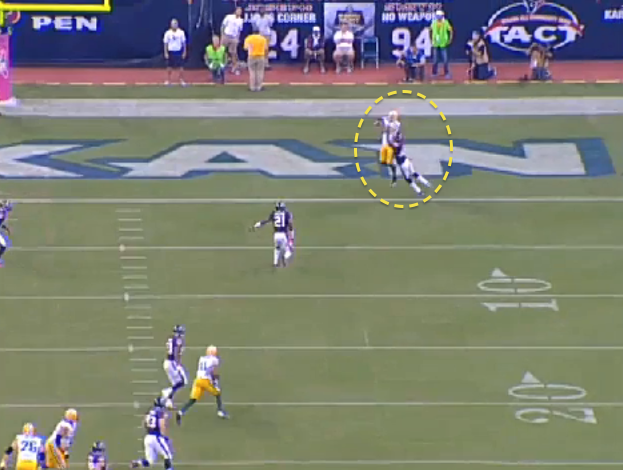 - Check out the ball placement here from Rodgers. The pass is high and to the upfield shoulder vs. a CB playing with outside leverage. Even with Ball playing solid technique from the snap, I don't see how he makes this play.

- When we go back to the route combination vs. Cover 4, this is what the Packers want. Remove the safety and target the leverage of the CB on an inside breaking route. Add in the perfect toss from Rodgers, and it is time to strike up the band and play the fight song once again.