Playbook session: a look at the 'Sucker' route

Click here to read my breakdown on Offensive Formation Alignments.

A couple of weeks ago I took a look at the “Dagger” route up on the chalkboard. A Cover 2 beater designed to run off the Mike LB (inside vertical seam) with a 15-yard dig route (square-in) breaking back inside of the numbers.

Today, let’s discuss the “Sucker” route. A very similar concept to the Dagger (seam-dig combo) with a short inside curl route to bait underneath zone defenders. 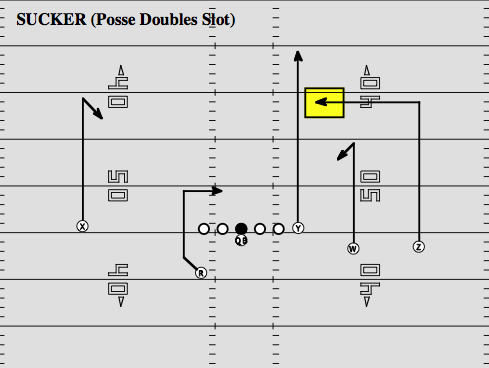 Route breakdown: Run out of a 3x1 (Doubles Slot) alignment. To the closed side of the formation, the TE (Y) will push up the field on the vertical seam with the slot receiver (W) running the inside curl. That leaves the Z on the dig route. To the open side of the formation, I have the X running a curl route. However, you can use the 9 (fade) 7 (corner), slant, etc.

The inside curl: Key to the success of the route if you are working vs. a zone-based defense. By running the W on the curl at a depth of 8-10 yards, you are setting some bait for a “seam-hook’ defender in Cover 2 or the “middle hook” defender in Cover 3 and Cover 4. Force those underneath zone droppers to jump the curl (leaving an open throwing lane for the QB) and target the Z receiver on the dig.

Primary read: You want to hit the Z on the dig. However, if those underneath defenders sink with the proper depth and hold off the dig route, take the curl. Read high to low and don’t force the dig if it isn’t there. Hitting the curl is just as good as checking the ball down (R) for positive yardage.