Playbook: What will the Jets show with Tebow?

We know the Jets are going to insert Tim Tebow into the game this Sunday vs. the Bills, but how will offensive coordinator Tony Sparano utilize his skill set at the QB position? Today, let’s discuss two possible schemes I could see New York carrying in the game plan when the ball is in the red zone: “QB Power” and “Swap Boot.” 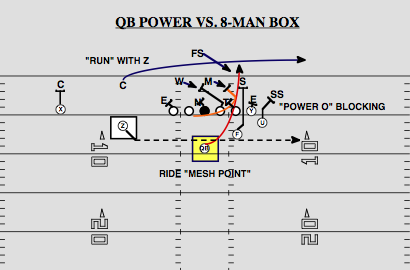 - Ace personnel with a FB (F) or even a third TE in the game. Use Z “short divide” motion (CB will run with coverage) to create an “option look” at the snap (Tebow will ride Z through the mesh point).

- Focus on the blocking scheme up front. No different than the 2-Back “Power O” vs. a 4-3 Over Front, the Jets are leading up on the Sam Backer (S) with the FB and pulling the open (weak) side guard (highlighted in orange) up through the hole on the Mike Backer (M). With a double-team on the 3-technique DT (closed side guard will work to the Will Backer), Tebow now has a running lane to get to the second level of the defense.

- The Z receiver is nothing more than “window dressing.” The Jets could hand the ball off (“Jet Sweep”), but this play is designed for Tebow. Load up the closed (strong) of the formation and get the QB in a one-on-one situation vs. the FS at the goal line. 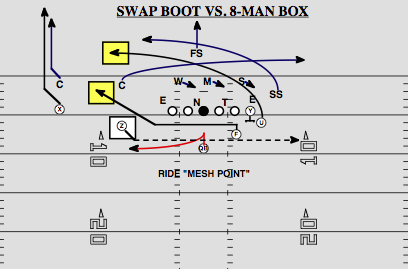 - Same formation, personnel and alignment as the “QB Power” with the Z once again using “short divide” motion into the backfield (CB runs with coverage).

- Tebow will fake to the Z receiver on the run action. (LBs step to the line of scrimmage). Force the LBs to stick their eyes in the backfield and roll the QB away from the play pass side of the formation.

- The route breakdown: X on the clear out 9 (fade) route, Y (TE) on the underneath crosser and F on the “swap” release to the Flat.

- This is a run-pass option for Tebow once he extends the pocket to the open side of the formation. If the LBs take the bait, he has the option of targeting F in the flat or looking up the Y working away from the SS playing from an outside leverage position.

We've partnered up with the team at FanDuel once again this season and are coming right out of the gates with a $1,000 prize pool salary cap game for Week 1 that is free to enter. CLICK HERE to sign up now!