Let’s take a look back at Monday night's game in San Francisco. Game notes, X’s and O’s, plus some quick hits from the Saints 25-22 win over the Niners. 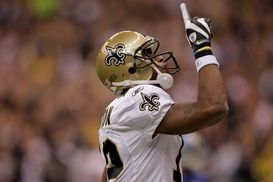 ICONColston came up with the big play in the final drive for the Saints.

The Saints final drive: Drew Brees took what the Niners gave him on the game winning drive. Saw the defense drop and play coverage—and took the check down. But, the play we have to talk about is the seam route he threw to WR Marques Colston. Against a pressure look from San Fran, Brees threw the ball to a spot that only his receiver could make a play vs. man-coverage: the back shoulder. That was the right call for the Niners, as the ball had to come out quickly, but in that situation it comes down to a great throw and a great catch. Brees finishes with a stat line of 28-38 for 254-yards and 2 TDs.

Alex Smith: I like Smith in this offense because he can throw the entire short to intermediate passing tree and make plays in the vertical passing game when he gets the opportunity. And, when he gets into a spread look on offense (which we saw in the two minute situation), he can use his feet to make plays out of the pocket. The two INTs will stand out in the box score, but that was an impressive drive he led to tie the game in the 4th quarter. 23-32 for 275-yards, 2 INTs and a TD on the night.

Conventional game plan for Saints: A different game plan than we saw in the opener for Sean Payton. Against Minnesota, the Saints used Posse personnel (3 WR, 1 TE, 1 RB), Jet (4 WR, 1 RB) and spread the field. Tonight? A heavy does of base Pro personnel (2 WR, 1 TE, 2 RB). That gives the Saints their full playbook of two back runs, the screen game and the short combination routes. Shows they can win without lighting up the scoreboard each week. 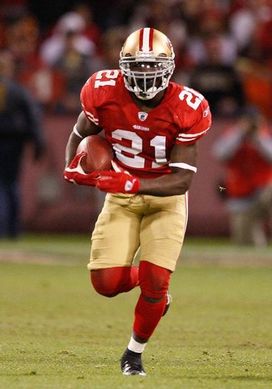 ICONGore ran for 112-yards and a TD in the Niners' power running scheme.

The Niners’ power game: This offense in San Francisco isn’t exotic when we talk about the running game. Two plays that they lean on: The Power O to the closed side (strong side) and the Counter OF to the open side (weak side). Both can be run out of Pro and Tank (1 WR, 2 TE, 2 RB) personnel. They are downhill plays with a FB kick out block and the offensive guard pulling through the hole. Everyone knows they are coming, and everyone knows where to fit in the run front from a defensive perspective. But, with Frank Gore at RB, the Niners have a player that is ideal for their offensive scheme. He is unique with his blend of power, vision and speed in the hole. 20 carries, 112-yards and a TD.

Bush’s injury: This will be a big loss for New Orleans if Bush is out for an extended period of time. He is big on special teams as a returner, plus he is a major part of the screen packages and the outside run game. The leg to the Saints' RB injury could change the way Payton calls plays going forward.

UPDATE: According to ESPN, Bush could be out up for up to six weeks.

Mistakes: It is surprising that the Niners were even in a position to win this game after the start they had. A penalty takes away great field position on the opening kick, they snap the ball out of the end zone for a safety and produce four turnovers times on the night. That is going to eat at head coach Mike Singletary all week long. A game they could have had at home.

Creating a matchup advantage: Mid-way through the 3rd quarter, the Niners brought their Tank personnel into the huddle. This is power look from a defensive perspective. But, with the ball in between the 40’s (deep play action field position), Smith hits TE Vernon Davis on a deep crossing route. The key here is the matchup. With Tank on the field (only 1 WR), Saints’ CB Jabari Greere now draws Davis in coverage—which is a advantage for the Niners from a size standpoint.

Wildcat: I understand getting Brian Westbrook in the game, but on a 3rd and short situation, the Niners aligned Westbrook in the wildcat, ran the basic Counter OF and then brought the punt team on the field. No need for that when Frank Gore can run the same play out of a conventional alignment and have success. A wasted third down opportunity.

The Bush TD: Bring Posse personnel on the field and run the HB angle route with Reggie Bush. With the 49ers playing a form of Cover 7 (man-to-man with safeties doubling WRs), Bush draws the matchup of LB Patrick Willis. In the angle route, the HB will stem his route outside to force the defender to work hard to keep his leverage, plant and come back to the middle of the field. Very high percentage play due to Bush’s lateral change of direction ability in the red zone.

Corner Cat: The CB blitz is a big part of Gregg Williams’ defensive playbook in New Orleans. He will send the CB and ask the safety to the call side to rotate over the top of the No.1 WR at depth of 15-yards with an underneath defender bursting to the flat. It is effective because the O-Line does not count the blitzing CB as part of the protection scheme—and usually leads to a free run to the QB. We will see Williams use his “Chucky” defense (named after Jon Gruden) down the road where he will bring both CBs off of the edge.

The “Tare” route: In the Niners offense (and across the entire league) when a RB motions out of the backfield to create a 3x1 alignment to the closed side with a two TE wing look, expect to see the “Tare” route. It is an option/ flat combo with the No.1 receiver running a clear out “9” route. The QB will read the coverage and throw the 5-yard option at the sticks or look to the flat with a 3-step drop.

- I need to give some credit to Saints kicker Garrett Hartley. Made three big kicks in that San Fran wind.

- The Niners need to get Michael Crabtree involved down the field. Catching the deep curl and running the deep dig will move the sticks, but this team needs explosive plays with his talent.

- Are we surprised that the Saints forced three turnovers as a defense? Not a shut down unit like we see in Pittsburgh or Baltimore, but a dangerous defense because they get their hands on the ball.

- That is two tough wins for the Saints to start the season. You need those as a team.

- Played in San Fran many times during my career. Small, cramped locker rooms, a wet field and tons of wind. Tough, tough place to play.