With the 2011 NFL Draft now behind us, here are five thoughts I have on this Monday morning—starting with the RB talk in New Orleans.</p>

1. The Ingram-Bush discussion: Makes sense to think that Reggie Bush is on his way out of New Orleans after the club traded back into the first round to pick up Mark Ingram. But from a pure X’s and O’s standpoint in the Saints’ playbook, I don’t see how the rookie RB impacts Bush’s role in the game plan. Coach Sean Payton uses Bush in a variety of ways to use take advanatge of his skill set (one-back looks, in the gun, aligned in empty formations, edge runs, pre-snap motion, etc). That shouldn’t change with Ingram (a downhill runner similar to Pierre Thomas) now in the mix. Different roles, different talents. The contract for Bush? That is another conversation, but when we talk actual football on the field, he should still be a vital part of what the Saints want to do on Sundays. If Bush wants to be there. 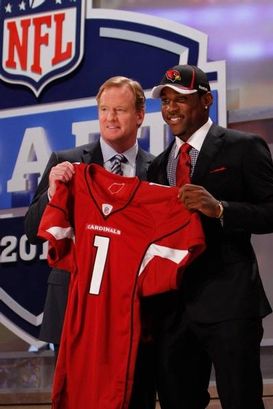 2. Arizona and Peterson: The selection of Patrick Peterson at No.5 was the best pick of the draft from my perspective. I do believe he could have gone No.1 overall to Carolina when we consider the talent, coverage skills and his impact in the kicking game. But let’s give Arizona credit for taking Peterson off of the board instead of reaching on a QB such as Blaine Gabbert, grabbing a WR or entertaining the idea of possibly trading back. Four teams passed on Peterson, and at least one of them will regret it in the future. Because CBs with size, 4.3 speed and coverage ability aren’t walking around on the streets.

3. QB situation in Washington is still unsettled: John Beck as the opening day starter in 2011? That was the story on the third day of the draft after the ‘Skins failed to address the QB position over the weekend. With Donovan McNabb most likely playing in a new uniform next season and Rex Grossman a free agent, the idea of Beck is real—at the beginning of May. But when we do see eventual veteran player movement once the lockout ends, I have a hard time believing Mike Shanahan and Washington won’t go looking for another option. Stay tuned on this one—because this sounds too simple for a Dan Snyder football team right now. And I don’t believe that Beck can win a division title for the Redskins.

4. The Bills make the right calls with defense: I have already seen the hype surrounding the draft the Lions put together in Detroit. And although that is deserved after the talent Jim Schwartz picked up, don’t forget about Buffalo. The Bills addressed multiple (necessary) needs on defense. Marcell Dareus was the right pick at No.3, LB Kelvin Sheppard should be an opening day starter and the attention they gave to the secondary will pay off in the AFC East. I love the pick of CB/S Aaron Williams in the second round and adding safety Da’Norris Searcy in the fourth provides depth, competition in camp and help on special teams—another aspect of the game dominated by defensive players. I played for Bills defensive coordinator George Edwards back in Washington. A smart and creative coach that has some new talent to work with.

5. The Bengals are starting over on offense: That is exactly what this draft told us when Cincy spent their first two picks on a WR and a QB. We can forget about Chad Ochocinco and Carson Palmer in a Bengals uniform next season. And now we get ready to see what type of production A.J. Green and Andy Dalton will have as rookies—because both of them should be on the field come opening day. We all know that Green was the top prospect at the WR position, and with Dalton the Bengals are getting a QB that does project to the west coast system of Jay Gruden. Expect some rough moments on Sundays as rookies, but both prospects are the future for the Cincinnati offense.

Check back to the NFP at 11 AM EST for Wes Bunting’s NFC Draft Grades.