Let’s take a look at some notes before we sit down and watch the preseason action tonight. As we saw on Thursday night in Green Bay, the competition will take a step forward this weekend. Short game plans are handed out and teams get some scout-team work in during the week. The closest thing we will see to regular season football in August. 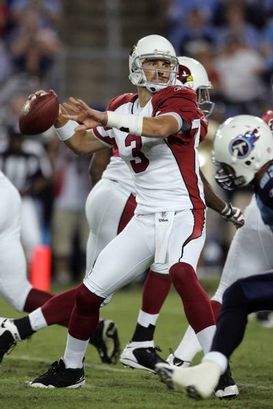 ICONAnderson gets the start over Matt Leinart tonight in Chicago.

Derek Anderson gets the start: Big story in Arizona with Matt Leinart going to the bench. Although D.A. gives this club production in the vertical game, he is inconsistent and struggles throwing the short to intermediate passing tree. Expect him to see plenty of Tampa 2 from Lovie Smith’s Bears—and some zone blitzing. But, both D.A. and Leinart will not see the Cover 0 blitz schemes that Tennessee rolled out on Monday night. Instead, watch to see who can drop back, find the throwing windows in the Bears’ defense and move the ball. Leinart had some comments yesterday, but if he wants to show something on tape, put a couple of scoring drives together, protect the ball and be decisive in the pocket. The game I want to see tonight.

The progression of the Bengals' rookies: With Antonio Bryant still out, the development of both WR Jordan Shipley and TE Jermaine Gresham has to continue up until the regular season. Gresham’s route running has improved in my opinion over the last three weeks and Shipley has the ability to play in the slot at the NFL level. Two key parts in the Bengals offense filled by first-year players.

More Favre: We should see more of Vikings’ QB Brett Favre tonight in the Dome when Minnesota hosts Seattle. He needs work in the basic scheme: the 3-step game, play action, third down situations, etc. Just like any veteran, he needs to see minutes in the preseason. With WR Sidney Rice on the shelf, let’s pay attention to how Favre distributes the football.

The Ravens' secondary: Time to start preparing for football in September without safety Ed Reed. Tom Zbikowski is a solid football player who can blitz and tackle in the open field, and the overall way the Ravens play football on defense and game plan will cater to the safety position. But can he make plays? What you miss with Reed on the sidelines is the range from the middle of the field and a player who can see routes before they happen—and drive on the football. With Zbikowski in the line-up, will the production drop? Something to think about when an elite talent like Reed is in street clothes.

C.J. Spiller: Great opportunity for the rookie with Fred Jackson and Marshawn Lynch on the sidelines. What I have noticed from Spiller this August is a quick first step to the hole and the ability to hit the second of the defense at almost top speed. The Bills need a player on offense who can flip the field and provide explosive plays. Let’s be honest—this franchise needs a playmaker.

Cutler: The Bears need to protect the QB. The O-Line play against the Raiders last week was atrocious. To produce in Mike Martz’s offensive scheme in Chicago, Cutler needs time to go through his route progressions and make good decisions with the football. Can’t do that when he constantly has to step up in the pocket and try to throw the ball under pressure. The Bears offense has the talent to score points—but keeping Cutler off the ground is the first step. LT Chris Williams needs to start playing football.

Exotic plays: Reverses, fake punts, the wildcat, etc. NFL teams will intentionally run exotic plays at this point in the preseason to force their week one opponents to waste valuable practice and meeting time preparing for these situations. Don’t be shocked to see a special teams coach try something crazy tonight.

Special Teams: Just as we talked about exotic plays in the kicking game, who stands out tonight? Can a late round rookie or a veteran bubble player make a big play? A big return, a caused fumble, blocked punt, etc. You want to make the opening day roster, then you have to show up on teams. Time is running out on roster hopefuls.

- The Dallas O-Line is beat up. Curious to see how they handle the Texans' front four.

- Jason Campbell in Oakland. From what I hear, the Raiders are impressed by the former Redskins' QB. This offense might be better than we think. A good test tonight against the Niners' defense.

- Should we be talking more about Matthew Stafford and the Lions? Have heard from plenty of defensive coaches who expect big things from the Detroit QB. Stafford gets the 3-4 pressure scheme from Cleveland tonight.

Check back to the NFP tomorrow for my Cardinals-Bears game notes that I will post after Dan Pompei’s Sunday Blitz.