Ready or not, the Packers are coming for Ponder

Vikings fans should look at the move to start Christian Ponder as a positive up in Minnesota. Get your first round pick on the field in regular season game situations that add to his development as a pro. Something the rookie won’t get in the film room or running the scout team.

True experience in the NFL comes from playing on Sundays—and working through corrections on the field. And if I am head coach Leslie Frazier, this is what I am going to do with the rookie QB when the Vikings host the 6-0 Packers this Sunday in the Dome… 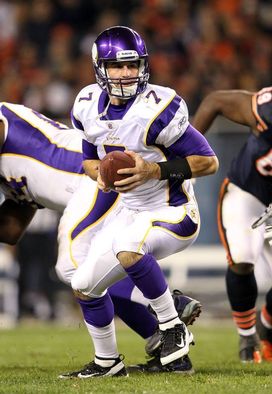 Built-in "hot reads" are one of the concepts I prep Ponder with this week in practice.

- The game plan. Ponder has a full week to prep as the No.1. Don’t shorten the call sheet or limit the personnel (and formation alignments) on Sunday. Throw a lot at him and see how he responds. The same drill as if Donovan McNabb were still the starter.

- Get the ball to Adrian Peterson. The Vikings RB should be the focus of the game plan and that sets up Ponder to work with some third and short-to-medium situations. If the rookie has to make plays on 3rd and 8-plus all afternoon vs. Dom Capers’ defense, you are setting him up to fail.

- Pressure is coming--both zone and man. Have built-in "hot reads" (think 3-step game) that target inside breaking routes. Using six and seven man protection will help, but we are talking about pressure schemes that Ponder didn't see in the ACC or the preseason. Get the ball out of his hands and Percy Harvin needs to be the top target when the rookie reads blitz at the line of scrimmage.

- Move him out the pocket off of play action. Ponder has athletic ability, so set up the boot, swap boot and sprint game to cater to his skill set. Work with the talent he brings to the field.

- Tell him to challenge the secondary. I understand that Charles Woodson and Tramon Williams will sit on routes and bait the rookie into making some throws. Plus, this secondary in Green Bay has no issue driving downhill on an inside breaking route. However, throwing the check down isn’t going to help him develop. I would encourage him as a coach to try and make some plays.

- Give him some deep ball opportunities. Ball in-between the 40’s, take a shot down the field. Use play action, 8-man protection and target the top of the route tree. Just as the Bears did to the Minnesota defense on Sunday night.

- Understand that mistakes are coming. That is important to remember with a rookie at QB, and we have already seen them from Cam Newton and Andy Dalton. But the key here is knowing those mistakes can (and will) be corrected in time. Part of the process when you have inexperienced pro talent running the offene in this league.