With Robert Griffin III and the Redskins coming to Solider Field to play the Bears, let’s run through some pre-game notes. Here are five things I will be focused on tonight as the preseason weekend rolls on. 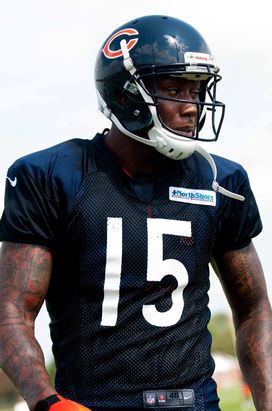 US PRESSWIREMarshall should see more reps tonight with Cutler under center for the Bears.

1. Cutler to Marshall: Down at training camp in Bourbonnais, this was the main attraction. The 9 (fade) route, inside vertical seam, deep comeback, "Dino" stem (corner-post), dig, etc. In the first preseason game, Cutler didn’t see the field and Marshall picked up one reception on an inside curl route. The veteran WR has looked like a Top 5 talent at the position on the practice field, now I want to see it during live game situations with Cutler under center. They need to get in some work before the season starts.

2. RGIII vs. zone pressure: Think 3rd and 2-6. Rush five, drop six into coverage and play a three-deep, three-under shell. That's what you get from the Bears. The key for Griffin: read the pre-snap look of the defense, recognize the blitz and get rid of the ball. The rookie will have to make the standard throws vs. Cover 2 tonight (Flat-7, 4 Verts, etc.), but seeing some pressure will be good for his development. A quick tip: keep an eye on Nickel back D.J. Moore. This is where the Bears want to bring pressure out of their sub-package.

3. Bears O-Line: The story in Chicago is the competition at LT between J’Marcus Webb and Chris Williams, but this unit as a whole needs to play a much better brand of football. On the edge, there will be some speed with Redskins OLB Brian Orakpo for Webb and Williams, but don’t forget about the play inside and the run game. Even in the preseason, you have to keep your QB out of 3rd and long situations. And that starts along the offensive front. This group needs to put some solid play on tape.

4. Redskins safeties: I’m interested to watch Brandon Meriweather (who struggled in the Bears Tampa 2 scheme lat season). Is he more disciplined, does he take the proper angle to the football and will he tackle with solid technique? Meriweather has the skill set (and range) to produce, but can the ‘Skins count on him to play disciplined football? Defensive coordinator Jim Haslett has some talent in his front seven, but he has to get some production from the depth chart at the safety position.

5. DE Shea McClellin: The rookie DE showed some positives in the preseason opener with his closing speed plus the ability to turn the corner on the edge, but there were also aspects of his game that must be corrected. Pretty standard for a rookie in this league. Again, you want to focus on McClellin at the point of attack. Can he set up a tackle, use his hands and create room to get to the QB? Plus, check out his pad level in the run front. Another test for the rookie tonight.