After checking out the first preseason matchup of 2012, here are some of my notes from the Hall of Fame game. Personnel, Xs and Os, etc. from what I saw on the field. 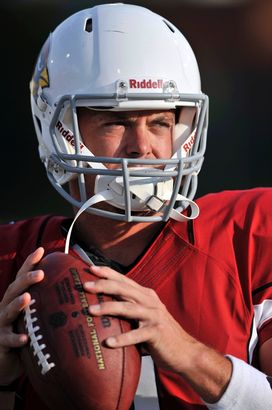 US PRESSWIRECardinals QB Kevin Kolb left the game with a reported rib injury.

Kolb’s injury: I will get to the interception thrown by the Cards’ QB, but an injury (ribs) during a camp competition is tough. Anyone could see that Kolb struggled last night running the first team offense behind an O-Line that played poorly, but I’m looking at reps here. Those are vital during practice and throughout the preseason schedule. Can’t miss those when you are competing for a No.1 job.

Saints’ first team offense: You put together an opening drive like that and you should shut it down for the night. Drew Brees and New Orleans used multiple personnel groupings and showed boot action, the screen game plus they ran the ball with production. Execute the offense, move the sticks on and produce points. Exactly what you want from your starters.

Jenkins’ INT: Great technique from the Saints’ SS playing a “thumbs” technique (play underneath the No.1 WR with CB playing over the top in 2-Man shell). Jenkins read the release, drove to the inside hip of the WR and then looked up the QB. Exactly how you want to coach it vs. the “Out” route. Play the technique of the defense and finish when the QB wants to challenge the underneath defenders.

Skelton: What you can see with the Cards’ QB is the arm strength and the release. Skelton didn’t get the ball down the field vertically, but watching him throw a basic Curl-Flat route, there is no question he can put some heat on the ball.

Darren Sproles: Only had two touches (RB Swing, outside zone), but I still love seeing the Saints’ RB square his pads and get vertical up the field. He has a burst to the second level of the defense that forces DBs to take perfect angles and break down in the open field. Not easy to do vs. Sproles.

Special Teams: Show up on tape. That's what we saw from Arizona's Justin Bethel. The DB made a great play from the gunner position on punt and blocked a FG attempt. This is how you earn your way onto an NFL club as a rookie.

Toss out of bunch alignment: On Alfonso Smith’s 4-yard TD run (4th down situation), the Cardinals used the RB Toss out of a bunch alignment. I like the call because it puts stress on the secondary and their run fits. On the Toss (or Crack Toss), gaps move, DBs panic and take a look inside. That opens up the edge of the defense.

Gideon’s INT: This is why you read your run/pass keys as a SS vs. play action. The Saints used Lead Weak run action inside of the 10-yard line and tried to throw the quick slant/seam. Gideon read pass (High-Hat read vs. TE) and dropped right into the throwing lane. Trust what you see and go make the play.