Let’s talk Saints-Packers as we wait for kickoff tonight up in Green Bay at Lambeau. Some Xs and Os, personnel and players that you should watch when you sit down to take in the NFL opener.

1. The Packers secondary: This is the best secondary in the NFL. Talked earlier in the week about the situational matchup of Charles Woodson vs. Saints TE Jimmy Graham, but another player to keep an eye on is free safety Nick Collins. A DB with top-tier range and ball skills. How do you test that? Look for QB Drew Brees to try and manipulate Collins in the deep middle of the field with his eyes. New Orleans will throw the deep inside seam and also test Collins outside of the numbers in the vertical passing game. The Packers’ safety has to play with depth and take good angles to the ball. 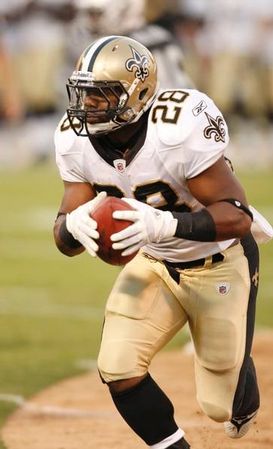 ICONThe Saints need to see production out of Ingram tonight in the running game.

2. Mark Ingram: No different than the Packers offense under Mike McCarthy, the Saints will spread the field. However, New Orleans can also roll their Tank personnel (1 WR, 2 TE, 2 RB) onto the field and get downhill in the running game. Think power football here (Lead Open, Lead Strong, Power O, Counter OF). Nothing unique, but they have to see production from the rookie RB. Patience, good vision and the ability to break tackles. Key to controlling the tempo of the game and putting TDs on the board inside of the 10-yard line. Ingram looked solid in the preseason, but this is a different game in September. Has to keep his pads low and move the sticks tonight.

3. Protection schemes: Having played for Saints defensive coordinator Gregg Williams, the idea here is simple: cause confusion in the protection count and get a free runner to the QB. Talked defensive football in this matchup last week at the NFP, and I still see a game that hinges on the ability to put the QB on the ground—consistently. Drawing up a blitz scheme on a chalkboard is easy, but the execution is why you earn a paycheck in the NFL. Pre-snap disguise will be key and don’t be surprised to see plenty of blitz concepts that bring pressure from the secondary. Could be a busy night for Woodson and the Saints’ Malcolm Jenkins rushing the QB.

4: Generate matchups: Going off of Woodson vs. Graham, look for both of these offenses to use their personnel groupings and alignments to get that ideal matchup where they can produce an explosive play (plus 25-yards). For New Orleans, that could be RB Darren Sproles (along with Graham). With the Packers, we know what TE Jermichael Finley can do down the middle of the field. And always look for players aligned out of position. You see Green Bay WR Greg Jennings aligned inside the numbers as the No.3? He is there for a reason—to get the ball. This is a great game to watch from an Xs and Os standpoint, because both offenses will script their game plans to find a one-on-one matchup they can exploit.

5. Special Teams/ Tackling: Always a key to big games at the NFL level (especially early in the season) and never a topic that garners enough attention. Can’t miss tackles in the secondary and your “gunners” on punt coverage have to show up to play tonight. Where does it all lead? Field position. And you can’t give Brees or Aaron Rodgers a short field to work with because of a missed tackle or poor coverage on teams. Wrap up, don’t duck your head on contact and put the ball carrier on the ground. Doesn’t have to look pretty, but you cannot afford to give away free plays or a big return because of poor technique when you come to balance to make a tackle.

Check back to the NFP after tonight's game for my notes…