Click here for my notes from Tuesday’s practice notes.

Let’s run through some of my notes from the North and South squad practice sessions on Wednesday at the Senior Bowl down in Mobile. 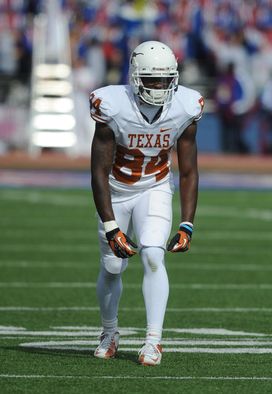 US PRESSWIRETexas WR Marquise Goodwin has top tier speed and showed the ability to win vs. press-man on Wednesday.

Goodwin’s ability at WR: I know the Texas product can run. Goodwin has top tier vertical speed. However, I was more impressed Wednesday with his ability to win at the line of scrimmage vs. press-coverage. Very athletic player when you watch him win on the release and get into the route stem. There has been a lot of talk from scouts on Markus Wheaton from Oregon State, but don’t forget about Goodwin as a WR that can earn an NFL paycheck inside of the numbers and pressing the top of the secondary.

CB Desmond Trufant: Smooth footwork, quick hips and he displayed the ability to play press-man in 1-on-1 drills. I thought Trufant played with a little swagger to his game and wanted to compete throughout the session on Wednesday. You can see the talent watching the CB change direction and drive on the ball.

BYU’s Ezekial Ansah: The DE has speed coming off the ball and I can see why scouts are drawn to his athleticism. But like most of the pass rushers down here in Mobile, Ansah has to develop his technique. Move past the bull rush, attack the edge of the blocker and use your hands to create leverage to the QB.

Stanford’s Stepfan Taylor: Thick build at the RB position (5-9, 216) with a solid burst to get through the hole and square the pads. If you look at the Stanford run game (Power O, Lead, Counter OF), Taylor is a fit at the next level.

DE Margus Hunt: The SMU product hasn’t had a great week of practice, but the opportunity to develop his skill set has to be attractive to NFL clubs given his size (6-8, 277). Hunt must develop counter moves when he gets on the edge of blockers and he needs pro coaching at the point of attack. Raw talent.

Gillislee’s vision: The Florida RB showed some vision on Wednesday when he got the second level of the defense. Gillislee was quick to create angles in the open field and I like the cut-back ability.

Quinton Patton: The WR runs clean routes. That’s why you see the Louisiana Tech product winning on double-moves. Set up DBs, chop the feet and then separate down the field. Patton had another solid practice on Wednesday.

Small school DT: Brandon Williams from Missouri Southern had a burst off the ball in 1-on-1 drills, displayed quick hands and plays hard. Keep an eye on him throughout the draft process.

Shawn Williams: The Georgia safety is going to hit and he will fill the hole in the run game. In 1-on-1 drills, Williams worked vs. the tight ends. And while he can slide the feet on the release and drive to the hip on inside breaking routes, he needs to keep TEs off his body at the top of the route stem. That’s where he allows some separation and finds himself in a trail position.