Stanzi works out for Harbaugh, 49ers

Quarterback is a position of need in San Francisco, and according to sources, new head coach Jim Harbaugh was in Iowa City today working out former Hawkeye Ricky Stanzi. 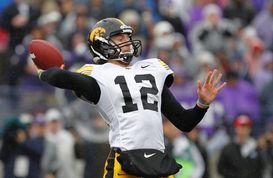 As I wrote last week, the Miami Dolphins worked out the senior QB after he had previously conducted a private session with the New England Patriots. Projected as a mid-round talent, more NFL teams are looking at Stanzi as a value pick that has room to develop after playing in a pro style system in Iowa City.

The 49ers will have options with the No.7 pick in the draft, but considering the overwhelming amount of top tier defensive talent that is projected to be on the board, QB is a possibility after the first round for Harbaugh.

And, as many believe with this year’s draft class, the best value at the QB position is in the second tier of prospects in Christian Ponder, Jake Locker, Colin Kaepernick, Stanzi and Andy Dalton.