Let’s talk Jets-Steelers. Five things that stood out from Pittsburgh’s (24-19) win over New York that sends them to Dallas for a Super Bowl XLV matchup with Green Bay.

1. Roethlisberger out of the pocket: The Steelers’ QB is so tough to defend because he can break down pressure, slide in the pocket and escape contain—which extends the play. Receivers can break off routes, come back to the ball and are provided with time to work away from the defender’s leverage. Roethlisberger didn’t have big numbers (10-19-133-2 INT), but go back to the 3rd down play to seal the win. Pittsburgh comes out in an empty look (no backs) and Roethlisberger extends the play once again to allow Antonio Brown to bring his route back across the field. Make the throw and head to Dallas. That is a luxury to have—and a nightmare from the perspective of a defensive back. 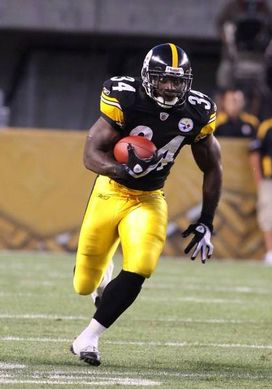 ICONMendenhall ran for 127-yards and a TD in the Steelers AFC title win.

2. Mendenhall's production: Didn’t see the same production in the second half for the Steelers’ RB, but what he showed tonight—against a physical Jets’ defense—is a great sign heading into the Super Bowl. Broke tackles, was able to press the edge against a fast defense and showed that burst getting to the second level. Bottom line: he looked quick and did display that cut back ability. 27 carries, 127-yards and pure power on the goal line when he took it in for a score. Pittsburgh needs to see that same production vs. Green Bay.

3. Jets’ goal line play calling: One of the topics that will be discussed this week when they were shut down on four straight plays in the second half. The question from my perspective: why throw the ball on third down? Start with the run and go with the boot action on second down. Nothing to discuss there—good play calling. However, to throw the quick 1-step slant on third down doesn’t add up when you have been controlling the line of scrimmage the entire drive. Bring your big personnel on the field, put Shonn Greene in the backfield and run two straight downhill runs (think Lead, Power O). Get the ball in the end zone. The Jets needed a touchdown in that situation with the way they had been playing up front and pushing around the Steelers’ front seven. Even with the eventual safety they forced on Roethlisberger, coming away without a touchdown on offense is an issue in the playoffs.

4. Sanchez: I was impressed with his play in the second half—because we started to see the Jets run their game plan. Play action, movement passes, the 3-step game, WR screen, etc. These are the throws that compliment Sanchez in Brian Schottenheimer’s scheme. The Jets’ QB took hits, showed the ability to step up in the pocket and made some playoff level throws under pressure. Go back to the second half vs. Indy and last week in the win over New England. His play in the post season has improved. Tonight: 20-33 for 233-yards and 2 TDs. He isn't perfect, but he steps up his play when it counts.

5. Pittsburgh’s defense in the Super Bowl: If you like defensive football and schemes this is the unit to watch. What they do under Dick LeBeau from a play calling perspective in unique. The multiple looks, edge pressure, zone blitz concepts in the secondary, etc. Even with their second half struggles tonight, they are the ideal matchup for Aaron Rodgers and the Green Bay offense. Very interested to see how LeBeau game plans the Packers and tries to eliminate their speed outside of the numbers. We have two weeks to talk about that, but I see the perfect matchup for Super Bowl Sunday.

Stay with the NFP all week as we bring you updates from the Senior Bowl in Mobile, AL.