Five things that stood out from the late afternoon kickoffs…

1. Manning’s INT: The Colts run an option-9 combo (think go route with an out route underneath). A good call vs. any 2-deep safety look or man-under. But, Manning makes a poor throw—and James Sanders gets the pick. I am curious to hear from Manning where he was going with the ball on that play. Surprising after he hits Blair White for the TD on the previous series vs. 2-Man down the middle of the field and then drives the Colts into scoring position. Three picks on the day for the Indy QB. And that leaves the Colts in second place in the AFC South—behind the 6-4 Jags. 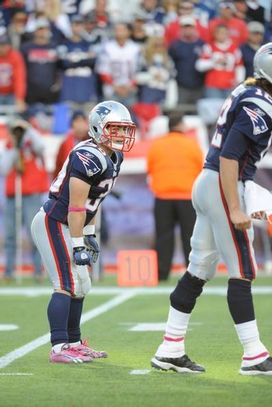 2. Danny Woodhead: I like this guy more and more every time I watch him play. He can break tackles, catch the ball out of the backfield and has very good vision—and lateral movement—in the open field. An ideal fit for the New England offense where he can work out of the gun, in the dot position as a single back and as part of the screen and draw package. Add in the fact that he covers kicks—which most of Belichick’s players do—and we are looking at a solid football player. One that didn’t come from the SEC, Pac-Ten, Big 10, etc. Something to think about when the NFL Combine rolls around in February.

3. Matt Ryan: Going back to last week with the win over the Ravens at home, and today’s road win at St. Louis, it is apparent that QB Matt Ryan and the Falcons are a legit 8-2. Ryan throws for 253-yards, 2 TDs and zero picks. He is efficient with the ball and is showing us that he is a mature passer in the pocket. And, don’t forget about the Falcons run game, because that only adds to Ryan’s quick on the field development. Fun to watch.

4. Brees lights up Seattle: The New Orleans’ QB throws for 382-yards and 4 TDs on 29-43 passing. Had the two INTs, but lets look at the scoring plays and where they came from on the field. Three of the four TD passes came at 23, 22 and 32-yards. We used to call that the “strike zone” on the field—just before the offense gets into the red zone and begins to alter their play calling. In these situations, you want to take a shot to the end zone—just like we saw today. Plenty of talk about how this New Orleans’ offense has become un-explosive. Not today, even if it was against a below average defensive unit under Pete Carroll in Seattle.

5. Don’t forget about the Bucs: Alright, Tampa is 7-3. Bottom line, they won’t go away. I didn’t buy Raheem Morris’ squad earlier in the season, but look at how they beat down the Niners today: power football. Tampa rushes for 162-yards, QB Josh Freeman throws for 136-yards and 2 TDs (no turnovers) and that Bucs' defense holds San Fran to 189-total yards. Frank Gore? 23-yards on 12 carries. This style of football wins on Sundays. Will be interesting to watch this young Tampa team compete with Atlanta and New Orleans in the final six weeks of the season.

Check back to the NFP tomorrow morning for my Week 11 “winners and losers.”