Click here to view my notes from the early kickoffs.

Pats’ 4th down call: Run the basic Lead Strong out of their Jumbo personnel—for a loss—on 4th and 1. Punt the ball with the 3-point lead and less than two minutes to play near mid-field or take the chance that Belichick did? I make the same call and try to ice the game on the road by picking up the first down. 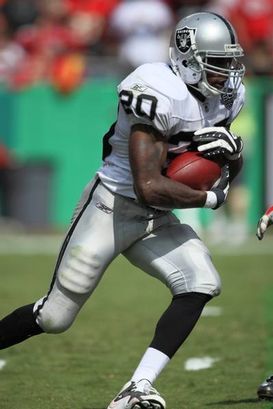 ICONMcFadden and the Raiders ran all over the Broncos in a 59-14 win.

Oakland pours it on: Check out these rushing numbers for the Raiders: 52-carries, 328-yards and 5 TDs in the 59-14 win over Denver. Over 6-yards per carry as an offense. Used to seeing numbers like that in the college game from Navy running the triple option—not in the NFL. Darren McFadden goes for 165-yards and 3 TDs on only 16 carries.

Another Chargers’ special teams mistake: How can the Chargers line up for a game tying field goal and draw a flag for moving before the snap? Take it back 5-yards and Kris Brown hits the upright. Bad football in another crucial moment for the 2-5 Chargers--who are losing despite big numbers from QB Philip Rivers.

Marshawn Lynch: Like what I see from Lynch in this Seattle offense. Looks fresh, can get downhill, breaks tackles and finishes runs. Ideal for the off-tackle runs in the Seahawks’ playbook. 24 carries for 89-yards in the 22-10 win over ‘Zona. Clearly the No.1 for Pete Carroll.

Pats’ 17-play drive: I do think this is the Patriots’ offense moving forward. A 17-play drive that eats up over eight minutes of clock to open up the second half. Methodical, a good balance of run and pass, multiple formations and the screen game. Not to say that Tom Brady (19-32-152-1TD) and this offense can’t be explosive, but with their personnel, this style fits.

Broncos: No need to get into X’s and O’s, game plans, schemes, etc. with Denver today after the beating they took from Oakland. That is an example of a soft football team.

Seattle’s Mike Williams: The WR was impressive in the Seahawks’ win over the Bears in Week 6 and he continues to make plays in this Seattle offense. Big, physical at the line of scrimmage and shows great body control when he has to adjust for a ball. 11 receptions for 89-yards and a TD. Have to say that Seattle looks like the team to beat in the NFC West.

D.A. over Max Hall: The Max Hall talk after the win over New Orleans was nice for the Cards, but he isn’t ready from a developmental standpoint to consistently win in the NFL. Give the ball to Derek Anderson moving forward in Arizona.

Check back to the NFP tomorrow morning for my "winners" and "losers" from the Week 7 games.