The deep ball is coming on Wild Card weekend

The Saints are a pressure-based defense under coordinator Gregg Williams. Multiple fronts, blitz packages and combination coverages in the secondary that allows DBs to drive on the ball. Creative schemes that I have detailed before at the NFP.

However, Williams will also lean on Cover 2 (or Tampa 2) to play coverage, take away the vertical route tree and force the ball to go underneath vs. a top-tier No.1 receiver in the NFL. On Saturday, in the NFC Wild Card matchup vs. the Lions, that is exactly what Williams and the Saints will get with Calvin Johnson aligned outside of the numbers.

The key for the Lions: create a one-on-one situation with Johnson vs. the deep half safety in Cover 2 to stretch the top of the defense. Let’s go to the chalkboard to break it down. 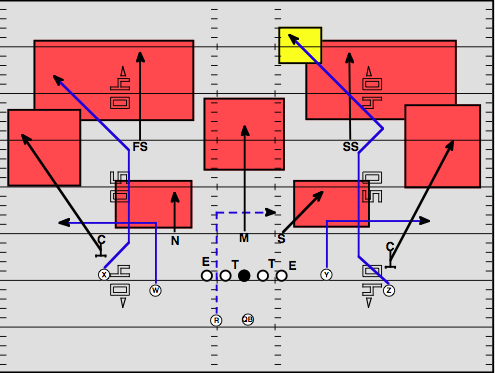 Some coaching points to discuss…

Alignment: A 2x2 “Orange” (spread) look from the Lions with TE Brandon Pettigrew (Y) removed from the core of the formation as a slot receiver to the closed side. An ideal look to run the Flat-7 (corner) concept.

Flat-7 concept: The Saints know they are going to see this concept because of the amount of Cover 2 they have put on tape. The CBs need to sink at a 45-degree angle to cushion the safety on the 7 route and force the ball to go to the flat (Y,W) or the RB (R) on the check down. As a safety, read the release of No.1 (hard, inside stem), stay square in your pedal and drive downhill on the 7 route. A technique taught in every defensive secondary.

The double-move: I call this a “Shake 7” (stem to the 7, break back to the post). Johnson will get vertical after his initial release, work to the top of the route stem and run the double move vs. a safety (Saints’ Roman Harper) anticipating a cut to the corner route.

Defending the double-move: This is the same route concept Johnson ran vs. the Bears on Monday night earlier in the season for six points. I talked about “staying square” in your pedal as a deep half safety vs. Johnson, because once you open your hips to the 7 route it allows the WR to gain leverage and work back to the middle of the field. Trust your eyes, don’t guess and play with enough depth to take away the route. Every route breaks at a depth of 12-15 yards down the field...know what to expect

One-on-one matchup: This essentially turns into off-man coverage down the field. The Mike Backer in Cover 2 will run the inside vertical seam, but he isn’t going to provide any protection on the deep post vs. Johnson. This is on the safety to play the technique of the defense and limit the vertical game. A tough spot vs. the top offensive weapon in the NFL and QB Matthew Stafford.

Will we see this on Saturday night down in New Orleans? From my perspective, I would run this concept at least once per half to test the top of the defense and look to flip the field. If the Saints want to play Cover 2 outside of their pressure-package, then try to exploit it.