Here are my quick game notes after watching the Thursday night game in San Francisco. Three things to take from the 49ers’ 13-6 win over the Seahawks. 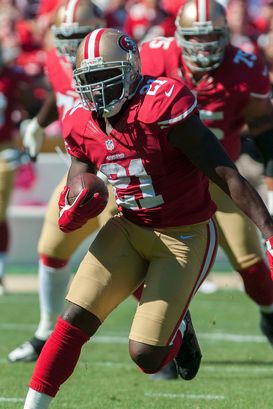 US PRESSWIREFrank Gore and the 49ers wore down the Seahawks' defensive front in their 13-6 win.

1. 49ers’ offensive game plan: Bring your big boy pads if you want to line up vs. Jim Harbaugh’s offense. Outside of a couple of missed throws on deep shots early to WR Kyle Williams, Alex Smith (14-23-140-1TD-1INT) worked the short to intermediate route tree and we saw a lot of Tank personnel (1WR-2TE-2RB) on the field. With Frank Gore (16-131) and Kendall Hunter (9-31), the Niners had fresh legs to run the inside trap game, the crack toss (tough on DBs to fit the run), Power O, Counter OF, Lead, etc. And that eventually wore down the Seattle defensive front.

2. Seattle’s missed opportunities: The lack of execution in the 4th quarter is on Russell Wilson and this entire Seahawks’ offense, but look at the drops from this unit. Early in the game we saw the Seahawks miss on the RB wheel route that should have resulted in points plus the 9 (fade) route up the sideline. I understand that Wilson’s numbers were suspect tonight (9-23-122-1INT) and he made some questionable decisions. But in a divisional game where you have to convert scoring opportunities and create field position you need to make plays for the QB on catchable balls.

3. The lone TD of the night: The Niners are running what I call the “X Spot” vs. Cover 2 on Delanie Walker’s 12-yard TD catch. Where do you usually see the “Spot” (Flat-Curl-7) combination? Out of a bunch look. Here, the 49ers run it out of Tank personnel with Vernon Davis bursting to the flat, Randy Moss on the Seam/7 and Walker coming back across the field to take the place of the curl. Just some added window dressing from Harbaugh using personnel and alignment to disguise a basic route we see every Sunday in the NFL.

A couple of quick hits…

- If you are going to tackle Marshawn Lynch in the open field, you better lower your pad level on contact.

- That was a panic throw from Smith in the end zone on the INT. I know Moss was open on the end line working off the “Pin” route from the front side of the formation, but throwing the ball back across your body vs. Cover 2 always leads to trouble. Toss it in the stands—and take the three points.