Think the NFL is 'shady?' Ask Chester Taylor and the Bears

I was cut three times over the course of my seven-years in the NFL, so I know the drill when it comes time to talk to the head coach.

Walk into the office, sit down and listen to some carbon-copy speech (one that is used around the league) on why you are a good pro, work hard, etc, etc. It isn’t until the end of the “talk” when the coach finally says you won’t be coming back. 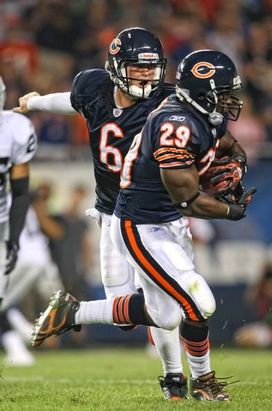 ICONThe Bears should have released Taylor on Monday and avoided this mess.

Thanks for the time, turn in you gear and don’t let the door hit you in the ass on the way out.

Part of the job, right? No question, but I have to say the stunt the Bears pulled on Chester Taylor Monday goes beyond the normal routine of losing your job.

Think about it for a minute. Taylor (who is “competing” with Marion Barber) practiced all last week, suited up on Saturday night in Nashville vs. the Titans and then watched from the sidelines the entire game.

That’s a kick in the gut right there from the perspective of a NFL player.

Why did it go down like that? Simple: the Bears didn’t want him to get hurt. The RB “isn’t in the team’s plans” and they don’t need to be on the hook for Taylor’s salary if he were to go down with a knee or an ankle.

No one said the NFL wasn’t shady before and this is probably nothing new that I am talking about today. However, to tell Taylor on Monday that he essentially will be released, yet keep him around while you try to find a trade partner, is a case of dirty pool in my opinion.

His value just plummeted on the market and the Bears are now stuck dealing with a player—on the practice field—that doesn’t belong there.

I have no doubt that Taylor will play for a NFL club in the 2011 season—and probably see the football on Sundays. But can you fault him if he carries a negative attitude to the practice field today at Halas Hall? To be honest, I don't even know if I would show up.

All he is doing right now is waiting to get cut or traded. I would be shocked if he plays on Thursday night vs. the Browns. And when the opening day rosters are set after this weekend, it doesn't look like he will have a locker in Chicago.

Like I said above, getting cut in this league is part of the business. It happens all of the time. There will be hundreds of players that lose their jobs after Thursday night and the slate of preseason games. But it still needs to be done the right way, something the Bears forgot to do on Monday.