Three routes you must defend in the red zone

Today, I want to look at three route schemes on the chalkboard that we will see from NFL playbooks once the ball crosses the 20-yard line: the Pin route, Dino Double Post and Double-China 7.

Let’s run through these concepts, check out the diagrams and then break them down to get a better understanding why you can beat Cover 2, Cover 4 (Quarters) and Cover 1 defensive schemes in the red zone. 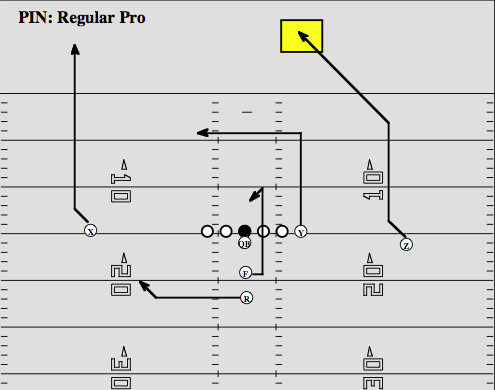 I drew the Pin concept up in Regular personnel (2 WR, 1 TE, 2 RB) aligned in a Pro I formation. A two-man combination (Y, Z) designed to test the discipline of the secondary in both Cover 4 and Cover 2.

Start with Cover 4 where we want to target the SS. He is responsible for any vertical route from No.2 (Y) past a depth of 12-yards. Here we cut the dig route (square-in) short at a depth of 10-11 yards. The idea? Get the SS to drive downhill on the Y, leaving the CB in a vulnerable position—playing outside leverage on an inside breaking route (Z on the post).

Switch to Cover 2 and target the Mike Backer running the inside vertical seam. Again, we want to open a throwing lane for the Z on the post. Force the Mike Backer to “squat” in his drop and sit on the dig and work the SS in the deep half. A solid, basic scheme that can target multiple coverages. 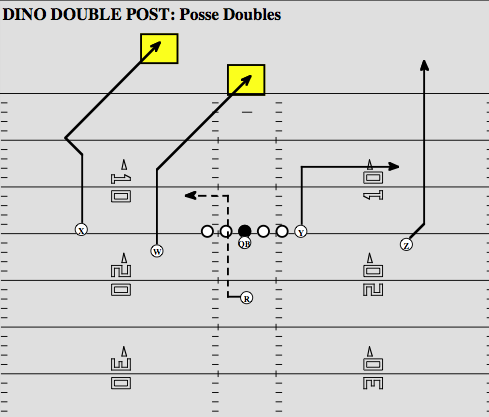 <p> If I am calling plays on offense, the Dino Double Post is one of the first concepts I add to my red zone game plan—because you can challenge the CB’s technique. Here we are looking at the Dino drawn in Posse personnel (3 WR, 1 TE, 1 RB) in a 2x2 Doubles alignment.

The key is the X receiver on the chalkboard. Release vertically up the field, stem to the 7 (corner) and break back to the post. With the W receiver (slot) running an inside post, the CB has to maintain outside leverage in a position where he can drive to the hip of the receiver and make a play. However, if the route is run with the proper technique, the WR will create separation once he stems to the 7. Now he has the CB on his back and break inside the deep post. Ideal vs. Cover 1 (FS has to play both post routes in the middle of the field) and vs. Cover 4. 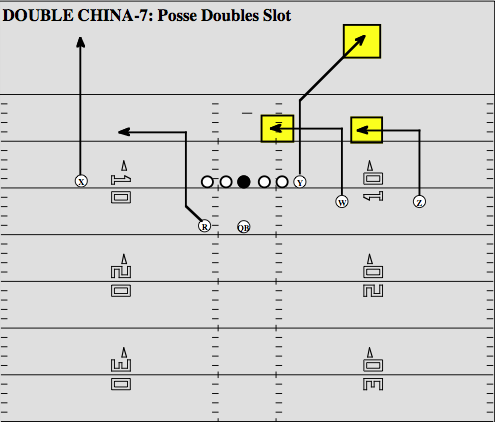 If you have a TE on your roster than can win vs. a SS, put this route concept in your game plan. Here, we see Posse on the field in a Doubles Slot alignment. Run the TE (Y) on the 7 cut with both the W and Z receiver breaking underneath on the short, inside China routes (short square-in). Working vs. Cover 1, you have the TE matched up with a SS running away from the help in the middle of the field (FS). Think of Antonio Gates, Jermichael Finley, Todd Heap, Tony Gonzalez, etc. With the two underneath routes taking both the closed side CB and the Nickel back inside, the TE now has room to work and get to the back of the end zone.

Same idea vs. Cover 2. Instead of the CB sinking to protect the safety on the 7 route, you want to draw him to sit in the flat and react to the China routes. Now we have a nice clean hole to throw the 7 route vs. the SS.

How do you stop them?

Technique and discipline within the defensive scheme called in the huddle. For each of these routes (Pin, Dino, Double-China 7), the offense is trying to target certain personnel—and their technique. Play the technique that is taught, and these routes can be stopped. Force the QB to check it down…