Three routes you must stop to win in the NFL

Let’s talk route schemes today and focus on three concepts that are in every NFL playbook: Flat-7, Dagger and Spot. It doesn’t matter if we are looking at the game plans of Mike McCarthy, Andy Reid, Mike Martz or Sean Payton—because all three of these routes are up top on their Sunday call sheets.

I want to breakdown these concepts on the chalkboard and discuss why they must be defended if you want to limit explosive plays and get off of the field on third downs. Let’s check them out and hit on some quick coaching points for all three.

I drew this up in Jet personnel (4 WR, 1 RB) in an “Orange” alignment, but this concept can be run out of multiple personnel groupings. We see it vs. Tampa 2 defenses and man-coverage/ pressure fronts throughout the league. Take a look at the route up on the chalkboard. 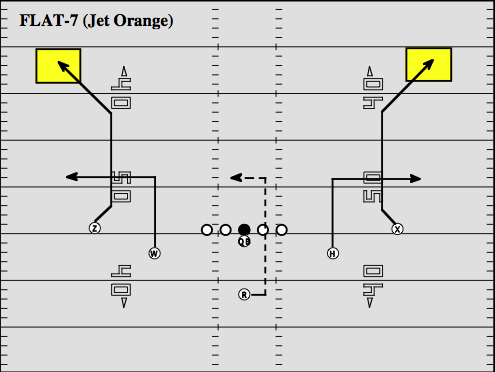 Put the stress on the safeties, as this is the No.1 Cover 2 beater in the NFL. And if you want to defend this route, your safeties need to play with enough depth to get off of the numbers and close on the ball. But don’t forget about your CBs. In Cover 2, if your corners don’t sink (hard) and protect the safety on the 7 (corner) route, you are asking for trouble vs. NFL QBs. The concept is simple: put the bait (Flat route) in front on the CB and force him to squat—leaving a nice throwing lane open to the 7 cut. And that is a gift for a QB such as Indy’s Peyton Manning.

Plus, vs. pressure or man coverage, you are testing the leverage of your CBs. Play with sloppy technique or lose leverage on the hard inside stem from No.1 (X,Z), there is no help with a route breaking towards the boundary.

I drew the Spot route in Regular personnel (2 WR, 1 TE, 2 RB) in a “Pro” alignment with the Z receiver on short divide motion. A bunch concept that will test the discipline of Cover 4 (quarters), Cover 1 and Cover 2. It looks simple, but if you can’t defend the Spot route on 3rd and short to 3rd and medium, you will not get off of the field. And that is a killer when you play good football on first and second down. Check it out on the chalkboard. 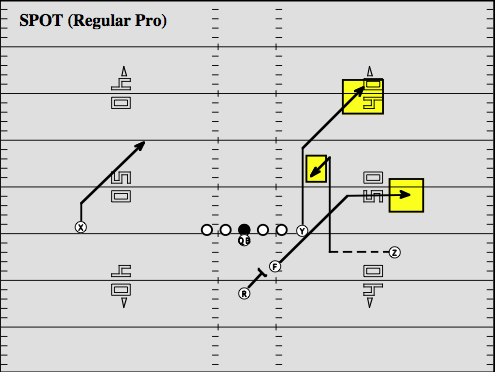 Looks simple, right? A 7 route from the TE (Y), the Z on the short inside Curl and the FB (F) running a simple Flat route. However, vs. any bunch concept, if you don’t keep leverage and understand route schemes, you will consistently get beat.

In Cover 4, there needs to be a “Box” call made (same as we discussed last week in my Cover 7 breakdown). Play four on three and drive downhill to take away the Curl (or the “Spot”), because that is where the QB wants to go with the football. In Cover 1, the CB needs to play close to the hip of Z and the SS must maintain outside leverage on Y running the 7. And, in Cover 2, the Sam backer (playing in the “seam-hook”) has to break to the Z—who will post up in the hole of the zone. The idea for the offense is to clear out space for the Z to work, and using motion forces the defense to adjust on the fly. Plus, don't forget about the backside X receiver. A 3x1 formation is an alert to the defense for the backside slant.

The deep Dig route, drawn here in “Posse” personnel (3 WR, 1 TE, 1 RB) in a “Doubles” alignment. We associate this route with Mike Martz’s offense in Chicago, but this is a concept we see all over the league. Once the route takes shape, we are looking at glorified “Hi-Lo” concept, but focus here on the middle of the field—because that is where the ball is going. 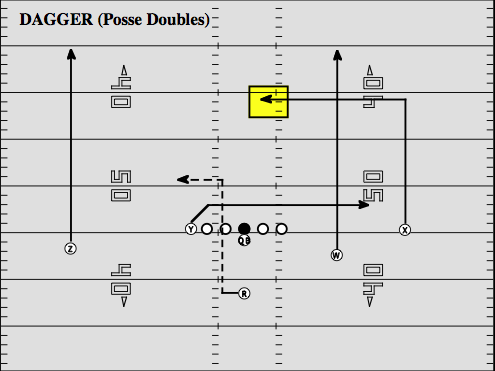 Clear out the middle of the field with the W receiver running the inside vertical seam. Perfect to take the Mike Backer out of the picture in Cover 2, run off the SS in Cover 4 and distract the FS playing the deep middle of the field in both Cover 1 and Cover 3. Working vs. zone coverage, the offense wants to find the hole between the top of the defense and the underneath droppers. And vs. Cover 1, you are testing the CBs ability to play the vertical release and drive across the field all while maintaining outside leverage. Not easy.

Look for this route on 3rd and 7-plus situations. Because if the QB has protection (and can wait for this concept to develop), this is an easy throw into the middle of the field. Move the sticks and start working your way down the field. From a defensive perspective, your underneath defenders must get enough depth to take away the dig.

Have a concept or scheme you want to see broken down? Send me an email at: matthew.bowen@nationalfootballpost.com