Time to cool down that playoff talk in Chicago?

NFL seasons can slide quickly. Take the Bears after the 10-3 loss to the Chiefs today. Two weeks ago (after the win over the Lions) Lovie Smith’s squad looked like a legit playoff team. Throw in the Cutler injury that was reported that night, Matt Forte’s knee today and a lack of turnovers (or big plays) from this Bears’ defense, and we are now looking at a different ball club.

But to drop one at home to the Chiefs and Tyler Palko? That’s bad football. Here is what I saw today from this Bears’ team that has me questioning where they are headed… 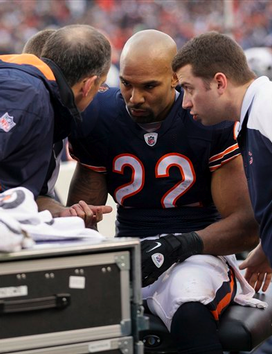 With Forte down with a knee injury, this Bears' offense lacks explosive talent.

- The Forte injury exposes this offense if the RB is down for an extended period of time (reported knee sprain). Chicago now losses another playmaker. Think about it this way with the Bears’ offense: where is the explosive play going to come from? Forte provided opportunities on the ground and in the screen game.

- I expected Caleb Hanie to improve after his first start last week. Instead, I saw the Bears’ QB continue to miss on opportunities. He was slow with his reads, couldn’t make a play on third downs and didn’t trust his feet (or eyes) in the pocket. And despite a couple of late throws, he won’t grade out well in the loss. The production just isn’t there from Hanie and the Xs and Os aren’t the issue.

- The O-Line play was poor. K.C. posted seven sacks, and while some of that can be attributed to Hanie’s play inside of the pocket, the sacks took away scoring chances. Can’t get your QB hit inside of the red zone and consistently on third downs.

- The drop by Roy Williams that led to a crucial INT? Can’t have that given the game situation in the red zone. That is a play the WR has to make for his QB. Inside breaking route that should lead to points—and a tie ball game. However, Williams doesn’t finish the play and the Bears come up short (again) in the red zone.

- The Hail Mary from Palko at the end of the first half (only TD of the game) is going to be discussed often this week in Chicago. My take: the Bears played it exactly how it is coached at the NFL level when you knock it down. However, this goes back to Friday (or Saturday) practice in the NFL. The scout team offense jogs down the field and shuts it down so the starting defense can make the play. The question I always get is simple: why not just catch the ball? Because coaches think that provides an opportunity for the ball to be tipped up in the air. Fluke play.

- Defensively, the Bears should play at a high level vs. Palko. This is a good defensive unit under Lovie Smith. However, that drive to start the second half led to points, took time off the clock and we didn’t see those big plays—game changing plays—that come when you drive on the ball. To stay alive in the playoff discussion, the turnovers have to be there. When your offense can’t produce, the defense has to provide field position and easy scoring opportunities. Part of the job.

Where does this put the Bears? Sure, they are still in the playoff hunt (and the Falcons’ loss today helps). But until there is better execution and QB play, how can you trust this club moving forward? Up next: Tebow and the Broncos in Denver.