The Rams' defense was all over Kevin Kolb and the Cardinals on Thursday night in St. Louis' 17-3 win. Here are some of my quick game notes: Xs and Os, personnel, etc. 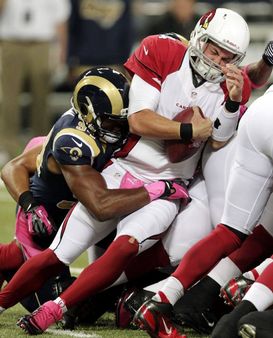 Kevin Kolb was under consistent pressure vs. the Rams.

Kevin Kolb and the Cards’ O-Line: I can agree that the Arizona QB left some plays on the field, but just look at the lack of protection he had vs. a young and fast defense from the Rams. DEs Chris Long and Robert Quinn made plays off the edge, the Cards’ couldn’t handle inside pressure and Kolb was repeatedly hit throughout the ball game. The Rams racked up nine sacks tonight—and that’s now 17 total sacks this O-Line has given up over the last two weeks. Can’t put drives together or allow routes to develop when the QB is taking shots under the chin.

Amendola’s injury: According to reports, the Rams’ WR left the game witha possible broken collar bone. The question now for Sam Bradford: where does he go with the football? With Amendola, the Rams had a WR that could run multiple breaking routes, make plays from a variety of alignments and work the middle of the field. This is a big loss for Bradford and this offense in St. Louis.

Arizona’s play calling in the red zone: I’m still trying to figure out why Kolb took the one-step slant to Larry Fitzgerald on a 4th down play inside the 5-yard line with the Rams playing Cover 2. On three straight snaps, St. Louis played their two-deep shell with the Mike Backer aligning at safety depth before the snap (creates a 3-deep look). Throwing the slant isn’t going to score points there. You have to challenge the middle of the field vs. Cover 2 or align in a 3x1 set and run a two-deep beater: Double Smash-7 (corner) or Double Smash-Seam.

Janoris Jenkins: The rookie has talent. Check out his ability to play press and use his hands on the release. Plus, the CB has the speed to transition, open his hips and run. Like any rookie DB, Jenkins can improve his overall technique and discipline, but the skill set is there. Just go back to his plant and drive vs. Fitzgerald—quick.

Givens’ TD on the double-move: I’m looking more at the technique of Cards’ CB Greg Toler here on the “Out and Up.” Aligned in an off-man position, Toler reads through the 3-step (proper technique in man-coverage), but never gets his eyes back to the Rams’ WR. And when you stare down the QB on any double-move, (Sluggo, Dino, Out and Up, etc.) you will automatically put yourself in a trail-position. Bad technique (plus a sudden hamstring issue) vs. a route that Toler should be able to handle.

Peterson’s pick: I wanted to talk about Peterson defending the fade route because of the technique at the line of scrimmage. The CB was aligned in a press-look, but played with a “bail” technique on the release (open the hips and run). Track the fade, play the ball at the highest point and finish. That’s not easy to do when you have to cut off the angle and stack on top of the WR with your back turned to the sideline.