Tough to argue against Polamalu for DPOY

I will admit that my money was on Matthews. He had a major impact on Dom Capers’ scheme during the regular season. Plus, if you want to see results in a 3-4 defensive front you better have a rush backer that shows up on tape—consistently. A player that can win off of the edge, collapse the pocket and get to the QB. That was Matthews this season and his overall production supported that. Hard not to put him at the top of the list. 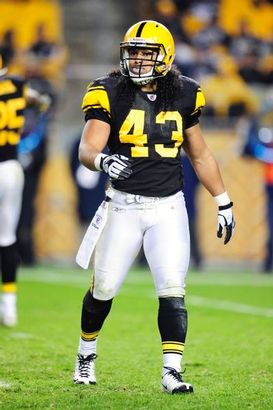 But how can you argue against Polamalu? The Steelers’ safety has an impact that we see every Sunday.

This is a different defense without Polamalu in the lineup. We saw that in 2009. A unit that couldn’t close out games and make that crucial play. Not this season. This defense is legit.

I talk about the X’s and O’s of the league often here at the NFP and there is plenty to study—and learn—for watching the Pittsburgh defense. And Polamalu is the main reason behind that success.

The zone blitz schemes, his play as an extra defender in the run front and what he can do as a Cover 2 or deep middle of the field safety. You start to break that down (and really get into how the Steelers’ play defense under Dick LeBeau) you will see the value of Polamalu.

We are talking about a player that can show the depth of Cover 3 linebacker, drop to the deep half and make a play with his back to the QB. I have only seen that one other time from a safety when I was playing with the late Sean Taylor in Washington. Unique skills that make you look twice on the field and in the film room.

The seven interceptions is a stat filler, but the DPOY goes deeper than numbers. I can say the same about Matthews’ 13.5 sacks. Those should just be window dressing when you cast a vote for this award. Overall impact and changing the way opposing offensive coordinators game plan should be the reason you get to put this award on the mantle in the living room.

If I had an AP vote in this race it would have gone to Matthews. The guy is a hell of a football player and had an outstanding season. A player I would love to play with and coach. But I can’t sit here and say that Polamalu winning the DPOY is an upset. He always shows up on tape, competes and plays the major role for the NFL’s No.1 defense.