Let’s take one more look at the Week 10 action in the NFL. Five “winners” and “losers” from Sunday…

1. The Patriots: Sunday night in Pittsburgh is a perfect example of why the Patriots continue to challenge in the AFC every season. Made the corrections after the loss to Cleveland and put together a solid game plan on both offense and defense. They pressured Steelers’ QB Ben Roethlisberger all night and played physical in the secondary as a defense. On offense, Tom Brady was better than Dick LeBeau’s unit. Worked the middle of the field, used the TEs and found ways to drive the football against what I think is the best defense in the NFL. Turning around after a loss with a top tier team on the schedule isn’t easy, but there is a reason the Pats don't lose two straight games very often. 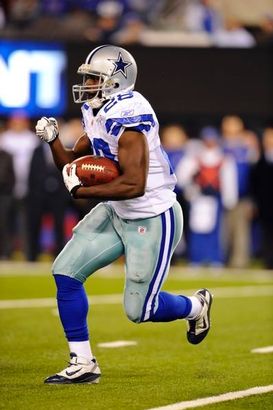 2. Garrett’s Cowboys: 1-0 for the new Cowboys head coach. Have to admit that this team looked different in all three phases of the game. On defense they challenged receivers, they won in the kicking game and on offense, this club looked like that explosive unit we talked about all summer. More balance in the play calling from Garrett and a game plan that got the ball to their playmakers: Dez Bryant and Felix Jones. Plus, a Can we attribute all of this to Garrett? No, but it always starts with the head coach. They set the temp for how you practice and how you prepare throughout the week. That showed in the Cowboys 33-20 win over the first place Giants.

3. Santonio Holmes: His ability to run after the catch. We saw last week in another OT win for the Jets. Run the deep 15-yard dig vs. Cover 1, make one move on the safety and get down the field to set up the winning field goal. On Sunday in Cleveland, more of the same. This time a 37-yard TD catch to give the Jets another win and move them to 7-2. The route: a simple 3-step slant vs. a CB playing with outside leverage and a deep safety aligned in a 2-deep look. We aren’t talking about complicated schemes here. Instead, we are talking about a WR making a play for his QB and his team. It isn’t easy to win on the road in the NFL and the Jets have just done it twice in a row in overtime with the big plays coming from Holmes.

4. Young QBs: Three names: Troy Smith, Sam Bradford and Colt McCoy. I was impressed with all of them. Smith and the 356-yards in the OT win. Bradford, another game without throwing an interception and once again looking like a veteran. Plus, we have to talk about McCoy. Didn’t get the win against the Jets, but the final drive to send it into OT was big. Drove the ball down the field, challenged Jets’ CB Darrelle Revis and got the ball into the end zone. All three QBs making big plays in November football. You won’t see that very often from quarterbacks who haven’t been in the pressure situation of the final stretch of the NFL season.

5. The Bills: Have to talk Bills today after Chan Gailey’s squad got into the in column Sunday at home against Detroit. Wasn’t pretty and once again this club almost failed to close out an opponent, but it is still a win. Showed up when they needed a stop on the two-point play. I have been on teams that went through long losing streaks. It is an awful experience. And being able to walk out of that locker room, head out to dinner and drink a beer with that feeling of getting the win is priceless. I can only imagine what it felt like to get back into that locker room at Ralph Wilson Stadium with a win after starting out 0-8. Will be a pleasure for those Bills’ players to come in and watch the tape today—because nothing beats winning on Sundays.

1. The Texans: Third straight loss for Gary Kubiak’s team—and all of that playoff hype has been reduced to a 4-5 record. Started slowly against the Jags, coughed up the ball late in the game, and saw Jags’ QB David Garrard win it on a 50-yard Hail Mary pass to Mike Thomas to win it. Every DB in this league is taught to knock the ball down in that situation. Coaches don’t want their players going for the INT (in fear of the ball being tipped straight up into the air), but the last thing you want to do is knock it back to the goal line. Every offense practices this play on Friday and on Saturday during the final walk through—and there is always a player trailing behind the play for this exact reason. Bad way to lose and a team that looks like it is going to miss out on the post season again. 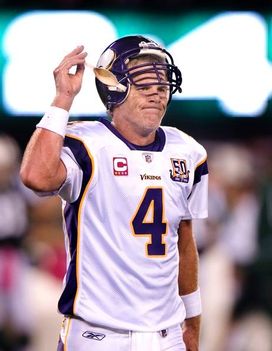 ICONFavre and the Vikings are 3-6 after a 27-13 loss to the Bears in Chicago.

2. Favre and the Vikings: Can we bury Brett Favre, Brad Childress and Minnesota for the 2010 season? The 3-6 record should say enough with both Chicago and Green Bay sitting at 6-3 in first place, but go deeper, and you will see a team that is a shell of the ’09 squad. The Vikings’ defense can’t generate pressure without sending extra blitzers. Jared Allen is being contained and the offense under Favre looks stagnant—almost dull. They were outplayed on offense, defense and special teams in the 27-13 loss to the Bears and look like a team that will be preparing for multiple changes—from the quarterback to the head coach.

3. Carson Palmer: I don’t understand the season for the Bengals QB. There is just so much talent on this Cincy roster when we look at their offense with Terrell Owens, Chad Ochoncinco, Cedric Benson, Jermiane Gresham, etc. But, once again, Palmer shows us inconsistent play. Throws three more interceptions (one returned for a score) and the Bengals really miss out on an opportunity when their defense played well against Peyton Manning and the Colts. I missed big when I picked the Bengals to win the AFC North, and at 2-7, it is time to call the entire 2010 season a bust in Cincinnati. And it all comes back to QB play.

4. Randy Moss: Maybe I am quick to judge Moss after one game in Tennessee—playing with two different QBs—but I still expected more. However, finishes his first game in a Titans’ uniform with one catch on four targets—with the lone reception coming late in the game. Outside of the P.I. penalty he drew early in the first quarter, Moss didn’t have any impact on Sunday. I would expect the Titans to continue to work him into the game plan, but without WR Kenny Britt, they are going to have to see more production—and results—out of Moss moving forward in the AFC South race. Even with an offense that is run through Chris Johnson, you still need to see numbers at the WR position. Rough first day for the new Titans’ WR.

5. The Chiefs: Can’t get out of here without mentioning Todd Haley’s club. Tough road loss last week against a very good Oakland team. That happens in the NFL. But to come back on Sunday and get physically blown out by Denver—a club that hasn’t played tough up front— ;tells me this team wasn’t prepared. Everyone was in on the route of the Chiefs—even Broncos QB Tim Tebow. Plus, the Chiefs have now dropped two consecutive divisional games. Had a shot to really pull away in the AFC West, but they have just opened the door for the Raiders and Chargers.