Let’s take a look back at the Sunday NFL action. Five winners and five losers from Week 12 in the NFL.

Click here for my notes from the Week 12 early kickoffs.

Click here for my notes from the Week 12 late kickoffs.

1. The Falcons: After the win over Green Bay, can we all agree that Mike Smith has a legit 9-2 team—and serious NFC contender—in Atlanta? This club plays very good situational defense, and on offense they will continue to win because of the QB play from Matt Ryan (24-28-197-1 TD) and a running game led by Michael Turner (23-110-1 TD) that can compete with anyone in the NFC. Great football game, but give the edge to Atlanta when we talk about the more complete team at this point of the season. They were the more physical team in the Georgia Dome.

ICONCutler threw 4 TDs in the Bears win over the Eagles at Soldier Field.

2. The Bears’ offense: QB Jay Cutler is going to stand out because of the 4 TDs, but look deeper at what the Bears did in the win over the Eagles at Soldier Field. The route concepts were designed to get the ball into the hands of their playmakers. Hester on the WR bubble screen and the slant. Earl Bennett working the option routs underneath. Johnny Knox on the post-corner and deep crossing routes and Greg Olsen on the boot. And, don’t forget what Matt Forte (14-117) was able to do out both the one-back and two-back running schemes. This was a balanced game plan from Mike Martz and it put the 8-3 Bears in first place in the NFC North.

3. Rivers and the Chargers: This team is coming—again. I understand that Indy is down and dealing with injuries, but how often do we see Peyton Manning get hit like that in the pocket, throw INTs and look uncomfortable as a QB? Flip over to the offense and Rivers, because they had a different game plan tonight. Run the ball, eat away at the Colts’ Cover 2 scheme and make that defense look soft at times. The Chiefs lead the division, but is there any reason to believe that they can hold of this Chargers’ team? I don’t see it.

4. Leslie Frazier: Maybe this is a stretch for a 4-7 team, but when you look at the mess that was created in Minnesota this season, why not talk about Frazier’s 1-0 record as a head coach. The Vikings shortened that offensive game plan, took some of the risk of Brett Favre’s hands by running the football and they played fundamental team defense. It was an ugly football game in Washington, but maybe that’s the ticket with this team. Simplify, play technique and allow that new voice on the sidelines to run the show the right way.

5. Sam Bradford: I can’t say what is going to happen in the NFC West right now. The Rams and Seahawks share the division lead—with 5-6 records. Regardless, let’s talk about Bradford. Throws for over 300-yars—on the road—and protects the ball. I wrote in my notes on Sunday that I am still impressed with a rookie QB who can produce while reading pro defensive coverages. That isn’t talked about enough, because the learning curve against some of these complex defensive schemes can take a couple of years, Bradford is doing it on the field—every Sunday.

1. The Andre Johnson-Cortland Finnegan fight: Let’s just get this out of the way—because fights on the football field are asinine. I played in this league and I don’t mind players going after each other—even through the whistle. But, when we start talking about throwing punches and ripping off helmets, it is time to move on. Leave that stuff for training camp, because both of those players looked like amateurs out on the field on Sunday. There is a big difference between playing aggressive and getting in a quick shove before you head back to the huddle compared with a real fight. Suspend them both, send the Fed Ex letter with the fine and put it to bed. 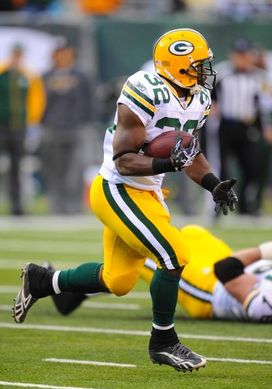 ICONJackson was held to just 26-yards in the Packers' loss at Atlanta.

2. The Packers’ run game: Let’s be honest here—because it isn’t good enough. Brandon Jackson is held to 26-yards on 10 carries. The Packers have abnormal talent with Aaron Rodgers (26-35-344-1 TD) at the quarterback position, but you still have to run the ball with production—especially inside of the 10-yard line. We aren’t talking about the sprint draw or the inside trap out of the gun. Instead, lining up in two-backs and picking up a first down or putting the ball in the end zone. Rodgers can take this team to the playoffs, but Green Bay needs to find some way to produce in their basic run concepts to navigate a playoff schedule in January.

3. The Titans: The Titans are playing some bad football right now. Four straight losses, a mess at the QB position and a final stat line from RB Chris Johnson (against a below average Houston defense) that reads 7 carries for 5-yards. I was sold that Randy Moss would make this a more explosive team, but he is just a guy with the Titans. Add in Rusty Smith at QB and this offense is as stale as it gets. Has to be a tough time for Titans’ fans after the 5-2 start.

4. The Raiders: I want to go back to the Raiders’ win over the Chiefs earlier this month. Played a physical brand of football, quarterbacks were making the throws and this team looked like a real player in the AFC West. After two straight losses, and the production they gave up in the running game yesterday to Ronnie Brown and Ricky Williams, what is our opinion now? Look at the offensive numbers from Oakland. Bruce Gradkowski throws 2 INTs and, as a team, the Raiders rush for 16-yards on 12 carries. That isn’t the style of football Tom Cable wants.

5. The Colts: Two straight losses have the Colts sitting in 2nd place in the AFC South with a 6-5 record. There isn’t going to be any starters taking off Week 16 or 17 this season. Yes, Manning looks vulnerable right now and the injuries at the RB position are an issue, but where is that defense? The Colts’ front seven will always be able to rush the passer, but even going back to Week 1 of the season, they have played soft up front vs. the run. It will be a fight to beat the Jags out for the division title.