Let’s go back and talk about the early kickoffs from the Week 14 Sunday schedule in the NFL. Here are some of my game notes from what I saw today.

- More Gronkowski as he breaks the record for receiving TDs in a season at the TE position. I’ve talked about it before, because when the Pats’ TE runs a route inside the numbers vs. a DB playing with an outside shade, it is almost an automatic win for Brady and New England.

- I will talk more about the Texans’ tomorrow (and their 10-3 record), but how big was it for rookie T.J. Yates to put that final game winning drive together with no timeouts to work with? Huge win for Houston and a situation we have all been waiting to see the rook produce in. 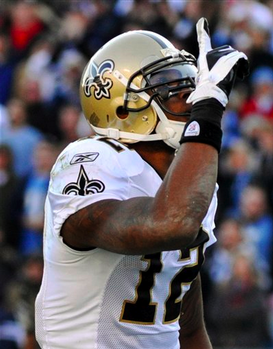 Colston caught 2 TD passes from Brees in the fourth quarter in the Saints' 22-17 win over the Titans.

- Looking at Drew Brees, the second TD pass he threw to Colston in the fourth quarter should be put on a teaching tape. It doesn’t get better than that on an inside seam route vs. tight coverage when we talk ball placement.

- It’s going to be tough for the Panthers to watch this tape tomorrow after blowing a 23-7 lead at home. Turnovers, a lack of execution and poor tackling in the second half allowed the Falcons to come back in a win they had to get in the NFC Wild Card race.

- Staying on Falcons-Panthers, if you didn’t see Julio Jones on the skinny post late in the 4th quarter, check out the highlights. Legit vertical speed after the catch to close out that win.

- Jake Locker made some throws for the Titans when he came in for an injured Matt Hasselbeck. But going back to that last play inside of the 10-yard line, the rookie can’t take a sack. With an opportunity to win the game, get the ball out and let your WRs go get it. Tennessee had a real chance there to pull off the upset vs. Brees and New Orleans.

- The Lions needed to put the Vikings away. I understand with Joe Webb in the game Minnesota was able to use an unconventional offense to generate points. No question the win counts, but this shouldn’t have come down to the final play and a fumble (along with a missed facemask call).

- That is the exact style of football I expected from Rex Ryan’s defense vs. the Tyler Palko and the Chiefs, but the knee injury to FS Jim Leonhard could be a major blow. You don’t want to lose a player like Leonard in the middle of the field when you run a complex pressure-based scheme.

- Vikings’ rookie Christian Ponder has shown the ability to throw the deep ball, move outside of the pocket, etc. However, the turnovers are an issue. Yes, that is a sign of a young QB in the NFL, but he has started enough games now where this has to be corrected.