Let’s go around the league and breakdown the entire NFL weekend. Here are ten things you should be talking about today—starting with the Chiefs’ upset of the Packers in K.C. 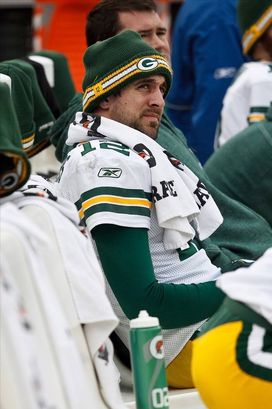 ICONRodgers and the Packers didn't execute or generate big plays in the 19-14 loss to the Chiefs.

1. Time to end the 16-0 talk in Green Bay:. Romeo Crennel deserves a lot credit for his defensive game plan and don’t forget about Kyle Orton (23-31-299) in his first start for the Chiefs. Kansas City was able to generate a pass rush vs. Aaron Rodgers, took away the big play and didn’t turn the ball over. That’s a huge win for a coach carrying the “interim” tag late in the season, but don’t start questioning the Packers after one loss. The injuries along the O-Line have to be discussed, because there is some work to be done there. However, from the Packers’ perspective, take this tape, break it down and get ready for the Bears on Christmas night. As I wrote on Sunday, if you don’t execute on the road in the NFL (and run into solid defensive game plan) you are probably getting on that plane with a loss.

2. Brady, Patriots take care of the Broncos: If you want to discuss how this game was won out in Denver, then look at Tom Brady and the TE position in New England. The Patriots’ QB (23-34-320-2 TDs) completed thirteen combined passes to Aaron Hernandez (9-129-1TD) and Rob Gronkowski (4-53). Again, matchup issues (a common theme vs. the Patriots’ offense) when you play Cover 1 (man-free) against Hernandez and Gronkowski. Middle of the field routes, option schemes vs. a defender’s leverage, etc. Even with the issues the Patriots’ defense had vs. the run game early, Brady put this game away in the second half (11-13 for 149-yards). And when you do that, there is no chance for another Tebow comeback.

3. Stafford, Calvin Johnson beat the Raiders: To get into the playoffs your big names have to show up in December. That’s exactly what we saw from Stafford (29-52-349-2 TDs) and Calvin Johnson (9-214-2 TDs) on the game winning drive. Detroit went 98-yards and the game plan was simple: get the ball to Johnson. The 7 (corner) route, deep post vs. Cover 2, the P.I. call on the fade and the skinny post to win the game. Consistent targets for the top offensive weapon in the NFL. On that TD throw, Johnson was aligned inside as the No.2 WR (slot WR). And anytime a player is aligned out of position it is done for one reason: to get him the ball. The Lions got the matchup they wanted inside of the numbers vs. man-coverage. An impressive final two-minutes for Detroit.

4. Brees puts up more numbers:</strong> I understand the Vikings have serious issues in their secondary right now, but don’t let that discount what Brees did to Minnesota on Sunday. The Saints’ QB completes 32 of 40 passes for 412-yards—and 5 TDs. Where does that leave Brees? Only 304-yards away from breaking Dan Marino’s all-time single season passing record. The Saints are hot and maybe playing their best football of the season. And if it weren’t for the year Aaron Rodgers was having in Green Bay, Brees would be a legit candidate to take home the MVP award. He is having that good of a season—even if his production isn’t the top story in the NFL.

5. Rex Ryan is outcoached in Philly: The Jets head coach has to take a lot of responsibility for this one, because I saw a team that wasn’t prepared vs. Andy Reid and the Eagles. Turnovers on offense in the red zone, an inability to cover the TE and no real answer for Michael Vick. The Eagles QB threw for 274-yards, Brent Celek caught 6 passes for 156 yards and RB LeSean McCoy ran for 100-plus (along with 3 TDs) as Philly rolled 45-17. That’s an embarrassing loss in the middle of the playoff push for a team that was in the process of putting together another late season run. The Raiders’ loss helps the Jets in the playoff picture, but it is going to be hard to watch this tape. I’m a big fan of Rex, but that was some bad football.