Let’s take a look back at the Week 15 NFL action. Five winners and five losers from the Sunday schedule.

Click here to read my game notes from the late Sunday kickoffs.

1. The Eagles’ comeback: Philly outplayed the Giants in the entire fourth quarter—and it goes deeper than DeSean Jackson’s punt return as time expired. Look at the offense. Michael Vick and his WRs adjusted to the Giants pressure. On defense, I saw a front seven that stepped up and also shut the door in a crucial four-minute situation. And, we can’t discount the onside kick—which looks like a call based off of tape study. Because that Giants’ front line was leaving early the entire game. The play by Jackson should receive a lot of hype this week, but this entire Eagles’ team made big plays in that final quarter. 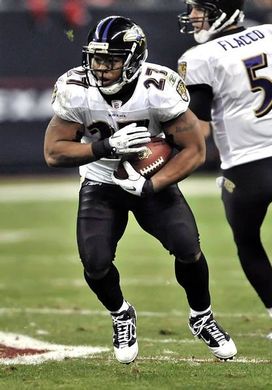 ICONRice finished with 236 total yards and 2 TDs in the Ravens' 30-24 win over the Saints.

2. Ray Rice: This is what makes December football great in the NFL. From an offensive perspective, you expect your big names to take over ball games—and that is exactly what Rice did in the 30-24 win over the Saints. 236 total yards (153 rushing, 80 receiving) and 2 TDs. Played big once he hit the second level of the defense, ran through tackles and used his cut back ability to take advantage of poor technique from the Saints. That game had a playoff atmosphere and Rice played like a running back on the playoff stage.

3. The Jets’ play calling: Brian Schottenheimer put together a solid game plan in the 22-17 win over Pittsburgh. Why? Because it catered to his quarterback. The Jets needed to see production from Mark Sanchez without the poor decision-making and the turnovers. Quick, easy reads in the passing game that allowed the QB to work the ball inside of the numbers. Plus, a consistent effort to run the ball and use the play action game. The numbers for Sanchez (19-29-170) won’t sell a lot of tickets, but this is the style of play the Jets have to get from their QB to win.

4. Dan Connolly’s kick return: This play will live on highlight reels forever. However, go beyond the way Connolly was holding the football or the stiff arm he dealt out down the field—because this was a huge play in the Patriots’ win. If they go into half down 17-7, game plans are changed, players start to press, etc. Instead, the Packers let up on their coverage (which always happens when a wedge player starts running with the ball), get out of their lanes and don’t tackle. That leads to a New England TD and we are looking at an entirely different ball game in the second half.

5. The Colts’ front seven: I didn’t expect this from the Colts defense heading into kickoff. However, that Indy front seven played fast, won matchups at the line of scrimmage and pursued to the football. Held a very physical Jags’ running game to 67-yards on 22 carries. Bottom line: they produced like a playoff caliber defense in a game that could decide the AFC South champ. That was a big win for Indy.

1. The Giants’ punt team: Matt Dodge deserves a lot of the criticism after the Giants loss for giving Jackson an opportunity by kicking the ball down the middle of the field. It was a crucial mistake. But, what about the coverage team? I saw missed tackles, guys playing out of control and an overall breakdown in coverage assignments. Sure, point the finger at Dodge, but there were ten other guys on that punt team who will collect a pay check on Tuesday that didn’t step up. Can’t allow Jackson to get vertical and carve up your special teams in that situation—just get him on the ground and go to OT. 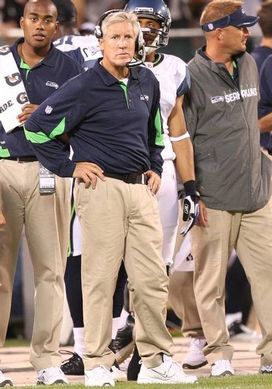 ICONCarroll and the Seahawks were a part of the 0-4 weekend for the NFC West.

2. The NFC West: No one wants to win this division. St. Louis gets physically pushed around by the Chiefs, the Seahawks don’t look a like a contender in a blow out loss to the Falcons at home and Arizona drops one to Carolina. Even going back to Thursday night and the 49ers (who are still alive at 5-9), this division is playing an awful brand of football. I will always support the idea that a division winner gets into the playoffs. Because of that, I am very interested to see which team can get consistent QB play, run the ball with production and make some game changing plays on defense over the final two weeks of the season to take the NFC West title. Someone has to do it.

3. The Saints’ run defense: One meeting room you don’t want to be in today is down in New Orleans. I have been in that room with Gregg Williams after a loss when the defense was shredded up front—and it can get nasty. The Saints were beaten at the point of attack, missed tackles and didn’t play fast enough to stop the Ravens’ rushing attack. As a team, Baltimore rushed for 200-plus yards. The Saints need to make those corrections today—because that won’t fly in the playoffs.

4. Gary Kubiak: The Texans were a 4-2 team earlier this season. Now? A 5-9 club that can’t close out games and yesterday played like they had packed it in for the year in the loss to the Titans. And when that happens—when a team shuts it down—the coach has to come into question. There is talent down in Houston, but eventually it all comes back to the head coach. And Kubiak has had multiple chances to turn this franchise around. Time to move on.

5. The Broncos’ defense: This Denver unit gave up over 500 total yards to the Raiders—with 264 of that coming on the ground. It should be an interesting off-season in Denver, but one of the main goals should be to hire a defensive head coach who is going to target that front seven and change the way they practice, prepare and play on Sundays.

Check back to the NFP this afternoon for some Bears-Vikings Monday night talk.