Let’s look back on the Christmas weekend schedule in the NFL before we start breaking down tonight’s Falcons-Saints matchup in New Orleans. Here are then things you should be talking about today—starting with Rodgers’ 5 TD passes vs. the Bears.

1. Rodgers pours it on: When the Packers’ QB identifies a CB he can go to work on, he is going to pour it on—and I don’t blame in. Rodgers went after the Bears’ Zack Bowman in the red zone and took advantage of the CB playing outside leverage (Cover 1). Rodgers threw the quick, one-step slant for two scores and also hit the back-shoulder fade for a TD vs. Bowman. A good lesson for young CBs out there vs. top talent at the QB position: you will get picked on conistenlty until you can make a play on the ball. Was Rodger’s production (5 TD passes) enough to take some heat off of a Packers’ defensive front seven that was beat up by the Bears’ O-Line at times? We will find out in the playoffs. 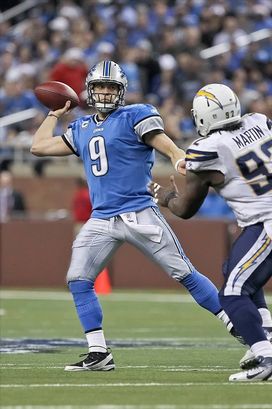 ICONStafford and the Lions punched their ticket to the playoffs with a 38-10 win over the Chargers.

2. Lions lock up a playoff spot: Detroit is back in the playoffs for the first time since the 1999 season and it starts with the production of QB Matthew Stafford (29-36-373-3 TDs) in the 38-10 win over the Chargers. The Lions quarterback again worked Calvin Johnson (4-102-1 TD) in the red zone, this time on the 9 (fade) route vs. Cover 2 for a TD. But he also spread the ball around. TE Brandon Pettigrew (9-80) was a big part of the game plan, Nate Burleson had six receptions, four for rookie Titus Young, three for Tony Scheffler, etc. Think about it, the Lions might be playing their best football of the season. And with that defense they could be a tough matchup when the playoffs start in January. Getting hot at the right time?

3. Brady takes over the second half (again): We saw this last Sunday in the Patriots’ Week 15 win over the Broncos and this weekend vs. the Dolphins was no different. This entire New England team looked sluggish, didn’t execute and played a poor brand of football in the first half vs. Miami. The second half? A different story. Brady increased the tempo on offense, worked the inside breaking routes in the Pats’ playbook and put together five scoring drives to get the win and keep the inside track on the No.1 seed in the AFC playoffs. New England made the adjustments in the second half. Give them credit for that. Brady finishes with 304-yards passing and TD to go along with 2 rushing scores.

4. Cowboys-Giants “flexed” to Sunday night: You have to like the move to “flex” the Cowboys-Giants matchup to Sunday night because this is an elimination game. Win and you get the NFC East title along with a post season ticket. Lose and its time to start the offseason draft prep. My first thought as a I look ahead to this game on Sunday: secondary play. Both Eli Manning and Tony Romo can throw the vertical route tree, will use play action and test the top of the defense. I’m looking for the secondary that can execute the game plan, limit explosive plays and play blitz-coverage. Perfect way to end the regular season under the lights.

5. Tebow struggles in Buffalo: Really no other way to spin this for Tebow in the 40-14 loss to the Bills, because 4 INTs isn’t going to cut it when you are trying to lock up the AFC West title. From my perspective, I saw a QB that wasn’t reading the entire field. Go back to the INT by Bills’ FS Jarius Byrd. Tebow can’t throw the inside seam route in that situation and its almost too easy for a DB to drive downhill and make the play. Instead, take the check down, work the underneath route concepts and move on to the next play. You have to read coverages, understand where you can go with the ball and prevent the turnover. Tebow put his team in too many adverse situations that led to a bad loss in Buffalo.