Let’s go back and take a look at the Week 4 Sunday action in the NFL: ten things that stood out, notes, X’s and O’s, game balls, etc. Plus, extra points from around the league.

Ten things that stood out…

1. McNabb’s return: Didn’t have big numbers (8-19-125-1 TD-1 INT), but we all know the importance of McNabb coming back to Philly and getting a win over Andy Reid and the Eagles. Made some plays with his feet, took advantage of a blown coverage from the Philly secondary and threw a nice ball on the seam route to TE Chris Cooley for a TD. Bottom line, the Eagles looked soft and the Redskins find a way to run the ball in their second divisional win—good enough for first place in the NFC East.

2. Flacco’s final drive: Down by three and on the road with no timeouts, Flacco showed us the ability to work the sidelines and take the simple 10-yard out routes to get his offense in a position to make a play in the red zone. And, when offenses get inside of the 20-yard line we start to see double-moves come into play. The Ravens were able to scan protection against an overload pressure from Pittsburgh and give Flacco time to stand in the pocket and hit T.J. Houshmandzadeh on a quick out and up for an 18-yard TD. To do this—against Pittsburgh—is as big as it gets in the regular season.

3. The Giants beat up the Bears: Chicago was anemic as an offense last night. No rhythm and no structure. Giants’ defensive coordinator Perry Fewell used a nice balance of coverage and pressure. And, when he did call his Cover 2 scheme, the Giants front four handled the Bears protection schemes. Didn’t matter if the Bears used five, six or even seven man protection. The Giants dominated them up front and finished with 9 sacks while knocking both Jay Cutler and Todd Collins out of the game. I haven’t seen an offense get beat up like that in a while. The Giants were physically better--and that wins in the NFL.

4. Kyle Orton: 341-yards and 2 TDs against a good Titans’ defense is something to talk about. But, what makes this more impressive is how Orton is consistently putting up productive numbers with no real running game to talk about. Denver only racks up 19-yards on 20 carries. But, this comes down to the execution from Orton in the Denver passing game. The Broncos’ QB is the ideal fit for Josh McDaniels' offense, the multiple route combinations and the type of wide outs Denver puts on the field. 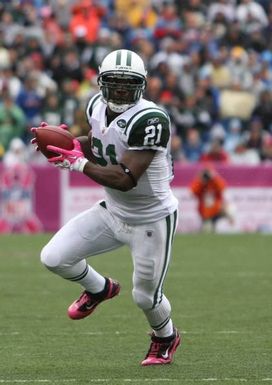 ICONL.T. and the Jets ran all over the Bills.

5. Jets’ running game: The Jets’ rushed for 273 total yards and controlled the clock for over 40 minutes. You won’t lose games in this league when you can dominate the line of scrimmage, methodically drain the clock and use play action to get big plays down the field. An ideal game plan and the same game plan we are used to seeing from this New York offense. LaDainian Tomlinson (19-133-2TD) is making people miss and we know what to expect from Shonn Greene (22-117) when he can get downhill. The Jets physically whipped the Bills’ front seven.

6. Green Bay’s Rodgers: It doesn’t matter what type of scheme you throw at the Packers’ QB. Cover 2, Cover 1, pressure, etc. Gong back to Monday night and yesterday in the win over the Lions, when I watch Rodgers it is all about ball placement. Take the TD pass to WR Greg Jennings on the fade route, or the seam route he threw to TE Jermichael Finley vs. man-under (which we will break down). Those are two balls that are thrown to the up field shoulder and away from the defender. The ball is on time and it puts the defender in a situation where solid coverage isn’t enough.

7. The Saints’ defense: Didn’t tackle well in the run game at home against Carolina. Something that has been an issue now for Gregg Williams’ defense over the last three weeks. But, this defense showed up when it counted. With Carolina in position to set up a field goal to steal this game on the road, the Saints made plays. Get the big tackle behind the line of scrimmage in the run game that puts rookie QB Jimmy Clausen is a passing situation, use pressure to get the sack and then make a play on the ball down the field. Ballgame comes down to a crucial situation in final minute—and the Saints shut the door on the Panthers.

8. The NFC West: The Rams win their second straight as they take care of Pete Carroll’s Seahawks—and are doing it with defense and good play from rookie QB Sam Bradford (23-41-289-2 TD- 1 INT). The Niners drop to 0-4 after a blown opportunity and the Cardinals look like a team that should have stayed on the bus in a bad loss at San Diego. Why shouldn’t we talk about Steve Spagnuolo’s Rams in the NFC West discussion at 2-2 after the first month of the season?

ICONVick was knocked out of the game in the second quarter.

9. The Vick injury: Let’s try not to speculate on the rib and chest injury that knocked Vick out of the game, but there was a noticeable difference when Kevin Kolb took over the huddle. The Eagles looked flat, could not generate anything down the field against the Redskins’ deep Cover 2 looks and had to rely on the screen game to produce positive yardage. Without Vick, this is a much more conventional west coast system—and every team in the NFC East knows how to defend it. Andy Reid has some work to do with Kolb.

10. Jags take down the Colts: I doubt we will see a more clutch kick this year than Josh Scobee’s 59-yarder as time expired to give the Jags a 31-28 upset win over the Colts at home. But, let’s also give some credit to QB David Garrard against the Indy defense. 17-22-2 TDs and scored on a 25-yard run when the Jags brought out the true speed option out of the counter backfield action. Big bounce back game for the Jags’ QB.

Rodgers to Finley: Let’s go back to this play. The Packers align in empty. Run a china/7 combo to the front side and then work two verticals on the backside. The Lions are playing man-under with a 2-deep safety over the top. The scheme is solid: run a linebacker underneath Finley on the seam route and use the safety as protection. But, with two vertical routes, the safety will be late reacting to the middle of the field. That gives Rodgers enough time to thread that pass into the small window between the linebacker underneath and the safety driving on the throw. 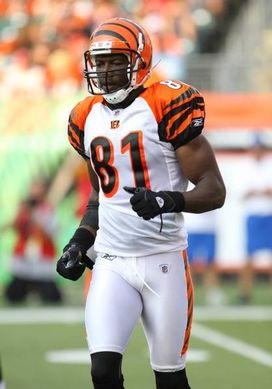 T.O. vs. pressure: On the 78-yard TD pass from Bengals’ QB Carson Palmer to WR Terrell Owens, the Browns were in a straight Cover 0 look. A 7-man pressure with man-to-man coverage and no safety help in the secondary. T.O still has good straight-line speed, and vs. pressure with a CB playing inside leverage (Cover 0 technique), the one-step fade is an ideal check from the QB. Win at the l ine of scrimmage and go get the ball. Nothing complicated here—just one-on-one speed vs. a pressed corner.

Niners’ get creative: Pro personnel (2 WR, 1 TE, 2 RB) with TE Vernon Davis aligned as the backside X receiver. With QB Alex Smith in the gun, San Fran runs a play action fake and then throws the bubble screen to Davis. Get the open side OG and OT out in front of the play and let Smith use his athletic ability and power to get to the end zone. Remember, Davis is aligned out of position for a reason—to get the ball. Another Niners’ loss, but we get to see new offensive coordinator Mike Johnson use some sense of creativity out of his base personnel.

Cutler vs. Cover 2: Cutler’s 1st half INT brings up a good coaching point. The Bears will run a variety of crossing routes in Mike Martz’s offense, but against Cover 2 (rush four, drop seven into coverage), these routes are essentially passed off underneath between zones. Cutler tries to hit Olsen vs. a CB squatting in the flat. It is the easiest play a CB can have in this defense. Jam No.1 and then read the QB. Can’t make that throw.

Shaun Phillips, Chargers: The Chargers’ OLB totaled 6 tackles, 4 sacks, 1 INT and a TD. That is a career day.

ICONOrton threw for 341-yards and 2 TDs.

Kyle Orton, Broncos: Have to give a game ball to the QB when he throws for over 300 with a pair of TDs in a win—and comes out of the game as the leading rusher.

Osi Umenyiora, Giants: 3 sacks for the Giants defensive end—part of 10 total for the New York defense.

Terrell Owens, Bengals: Bad loss for Cincy, but T.O. blows up the Browns secondary: 10 receptions, 222-yards and a TD.

LaDainian Tomlinson, Jets: 155 total yards and 2 TDs. Not bad for a guy who is part of a 2-man rotation in the backfield.

-Giants’ RB Ahmad Bradshaw has great cut back ability—perfect for a defense in Chicago that can over pursue to the ball.

- Atlanta gets the win as they go to 3-1, but QB Matt Ryan shouldn’t have to throw the ball 43 times in Mike Mularkey’s offensive scheme.

- Steelers’ safety Ryan Clark is rarely out of position and is one of the most underrated players in the NFL when it comes to filling the alley in the run game.

- The defenses of the Giants and Chargers combined for 19 total sacks yesterday. Going to be tough to watch that tape in Chicago and Arizona today.