Let’s go back and check out the Week 5 Sunday schedule. Ten topics you should be talking about today after watching the games…

1. Green Bay’s Aaron Rodgers (again): There are plenty of angles to take with the Packers’ QB after he completed passes to 12 different receivers in the win over the Falcons, however look at what he can do in the middle of the field. Green Bay used play action to open up the inside breaking routes of their playbook. And when Rodgers can target the inside seam, the slant, the skinny post, etc. he is going to put up big numbers and get the ball in the end zone. You almost have to be perfect with your technique (and eyes) vs. Rodgers at the LB and safety position to survive. 26-39-396-yards and 2 TDs. MVP numbers right there. 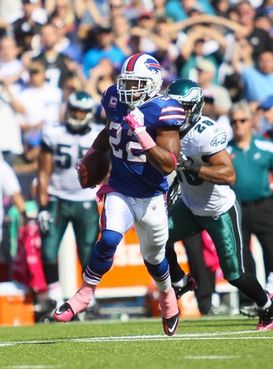 ICONFred Jackson continues to put up numbers for the Bills as they move to 4-1.

2. Fred Jackson and the 4-1 Bills: If we started casting votes for the Pro Bowl today, Fred Jackson would be a starter for the AFC. He continues to produce numbers on ground (111-yards) and catching the ball out of the backfield (85-yards) in Chan Gailey’s offense. No question the Bills got some big plays from LB Nick Barnett and others, but when I look at this team (a legit team), its hard not to be impressed with Jackson. Consistent, tough and plays with speed.

3. Trouble in Philly: Can’t have Michael Vick throw four-picks, put yourself in poor field position due to penalties or miss tackles on defense. But that is exactly what we saw from the Eagles in the 31-24 loss to the Bills. Forget talent here, because when you don’t play with technique (and continue to bring an undisciplined brand of football to the stadium) you are going to get beat in this league. No excuses here, this is a 1-4 football team that could be done with a loss to the Redskins next week. Andy Reid needs to get that win.

4. Jim Harbaugh and the 4-1 49ers: Harbaugh can coach and his team plays with a style that wins up front. The Niners ran over the Eagles in Week 4 and came back and blasted the Bucs 48-3 on Sunday. More of the same from Frank Gore (125-yards), QB Alex Smith made some big throws to TE Vernon Davis, plus this San Fran defense forced turnovers and held Tampa to 86-yards on the ground. I didn’t expect the Bucs to lose like this on the road, but I also didn’t expect the ‘Niners to be the clear favorite in the NFC West.

5. Roethlisberger’s numbers: The Steelers’ QB throws 5 TD passes in the win 38-17 win over the Titans, but what I want to discuss is the route schemes. Quick, 3-step concepts, plsu play action on the goal line and in the vertical game. An ideal way to counter pressure and get the ball out of the QBs hands. This Pittsburgh O-Line has issues and I wouldn’t be surprised to see a game plan moving forward that caters to the 3-step game, the boot and deep play action. That is going to create more opportunities for Roethlisberger to test the defense. Those are big numbers for the Steelers’ QB.

6. Patriots’ run game: Tom Brady can still get the ball to Wes Welker and use the TE position in multiple route combinations, but what stands out in the Pats’ win over the Jets is the run game. Ben Jarvis Green-Ellis produced 136-yards and 2 TDs on 27 carries as the Patriots used a balanced game plan. Ran out of the one-back looks, the gun, etc. And from my perspective, New England played like the more physical team up front and wore down Rex Ryan’s front seven. 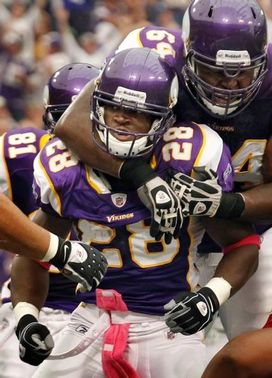 ICONPeterson carried the ball 29 times and produced 3 TDs in the Vikings' first win of the 2011 season.

7. Vikings’ game plan: This is the game plan Vikings’ fans should want to see—every week. Use the quick game with Donovan McNabb, but run your entire offense through Adrian Peterson with the off-tackle schemes. A.P. ran the ball like the top RB in the league, was explosive in the red zone and finished off DBs on his way to 3 TDs. Ends the day with 29 carries, and I don’t see any reason why Minnesota would alter their game plan for the rest of the season. This Vikings’ offense does have limitations, but when you ride Peterson, you can be competitive and win.

8. Raiders get the win: We all know that was a big win for this Raiders’ franchise after the passing of owner Al Davis on Saturday. Plenty of emotion from head coach Hue Jackson in the win over the Texans. One play to discuss? Michael Huff’s INT to close it out on the final play of the game. Houston ran a Smash-7 (corner) combo to the open side of the field. Smart call expecting man-coverage. But go back to Huff, because when a play breaks down in this situation, there is nothing tougher as a DB than “plastering” a WR in the end zone. Give Huff credit for sticking with Jacoby Jones when this turned into a playground route.

9. Tebow Time in Denver: The Broncos are on the bye in Week 6, but I still want to see what Tim Tebow can do as the starter in Denver after the Broncos pulled Kyle Orton. We know this is going to a big topic this week in the NFL, and as I wrote on Sunday, the Broncos moved the ball on offense when he was under center vs. the Chargers. No need to speculate here, because if Tebow is a true No.1 in this league, he will have to produce, make plays and win games if he is given the keys to this Denver offense when they are back on the field. Let’s see what he can do.

10. Texans’ injuries: Houston picked up some explosive gains on offense using the play action game to get the ball down the field without injured Andre Johnson on the field. However, with the WR still out for an unknown period of time, and the pectoral injury (which could be season ending) to OLB Mario Williams on Sunday, we are talking about two keys players out of the lineup. Every team deals with injuries, but the Texans are down two of the top players in the NFL. That’s a problem for Houston.