Let’s take a look back at the Week 7 action. My “winners” and “losers’’ from the slate of Sunday games…

Click here to read my game notes from the early Sunday kickoffs.

Click here to read my game notes from the late Sunday kickoffs.

1. Green Bay: Have to talk about the Packers’ win at Lambeau over Brett Favre and the Vikings. Coming off two straight OT losses, and the injuries, this was the type of game you have to win against a divisional opponent at home. Both Favre and Aaron Rodgers were carless with the football, but what matters in these types of games is the fourth quarter. Who can make the plays in the critical situations? That was Green Bay on both sides of the ball. Wasn't a perfect ball game, but the win is all that matters. 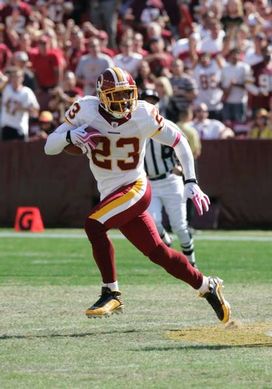 2. DeAngelo Hall: Four INTs is a season for some guys. And, unfortunately, a career for someone like myself. Hall does it in one game at Solider Field in the Redskins’ 17-14 win over the Bears. The one thing about Hall is his ability to jump routes. Saw it yesterday where he slide inside of a receiver at the line of scrimmage and break on the ball. Throw in a one-handed pick playing blitz coverage vs. an out route on a poorly thrown pass by QB Jay Cutler that he returned 92-yards for a score. We are looking at the type of day that sends players to Hawaii for the Pro Bowl. Hall put together his own highlight reel in a game littered with mistakes and turnovers.

3. The Chiefs: Some questions about this club after the two straight road losses in Indy and Houston, but I do think Kansas City can be a playoff team There are things you can gain from every Sunday in the NFL. For the Chiefs, it was the way they closed out the Jags. Yes, Jacksonville started Todd Bouman at QB, but when you score 21-unaswered points to finish a game we have to talk about execution, fundamentals and overall good football. That’s what we got for Todd Haley’s club yesterday. They can run the ball in Charlie Weis’ scheme with Thomas Jones and Jamal Charles, plus that defense is solid under Romeo Crennel. Are they good enough to run away with the AFC West? Let’s see.

4. The Titans: This is a 5-2-football team. A quiet 5-2? I would say so. WR Kenny Britt explodes for 225-yards receiving and 3 TDs, Chuck Cecil’s defenses continues to play aggressive football forcing four turnovers, and despite a pretty average day for RB Chris Johnson (24-66), Kerry Collins gets them another win. However, the play of Britt sticks out. Tennessee is an offense that relies on the production of Chris Johnson, but when they can stretch the field in the vertical passing game, that changes they way opposing defenses will game plan. More options for Collins or QB Vince Young. This is a good football team.

5. Helmet-to-helmet hits: The league wins—for one Sunday. Didn’t see the violent collisions in the open field that drove discussion throughout the week after the hits last Sunday. Is it a case of players thinking about the possible suspensions and the big time fines that would come down from the NFL? I’m sure that did play a role. Now, let’s see if it can continue throughout the rest of the regular season. There are always going to be hits in the running game and on the sideline where it is impossible to prevent helmet-to-helmet contact (which I did see plenty of yesterday), but what the league wants to avoid is the big hits in open space. That leads to bad PR. A clean Sunday in terms of defenseless receivers getting lit up.

1. The Broncos: Beyond the 59-14 loss to Oakland, and the amount of rushing yards Denver gave up (328), what stands out from my perspective is how soft the Broncos have looked. Started against the Ravens, continued vs. the Jets’ rushing attack and blew up yesterday. The amount of time you prepare throughout the week as a player between practice, meetings, film study and game plans should allow you to play competitive football in the NFL. Plus, we are talking about playing a divisional opponent—a team you know from a personnel and scheme standpoint.No excuse to be outplayed physically like that.

2. Kevin Kolb: Back to the bench, according to Eagles’ head coach Andy Reid. We have talked about opportunity countless times in Philly already this season when it comes to Kolb and Michael Vick. In Reid’s mind, he now sees Vick as giving his club the best chance to win. The only thing that matters moving forward is that Reid sticks with his QB. Now that he has made the switch (again) after Kolb had three turnovers in the loss at Tennessee, he has to show this team, and this locker room in Philly, that Vick is the guy. Can’t play musical chairs anymore. I don't know how I would react as a player for the Eagles.

3. Jay Cutler: The Bears’ QB had five turnovers. The four INTs we talked about above to DeAngelo Hall and the crucial fumble going into the end zone. We can point the finger at Mike Martz, the offensive line and the receivers breaking off routes, but this loss was on Cutler. Made poor decisions with the football and took points off of the board with two of those turnovers coming in the red zone. Chicago needed this win and have now lost two straight NFC games at home. Had the chance to create some separation in the NFC North, but look vulnerable even with the 4-3 record.

4. The 49ers: Can we put Mike Singletary on the hot seat for the rest of the 2010 season? Easy for members of the organization to talk about turning around the season, but when you go on the road and loss at winless Carolina, it speaks volumes about where you are as a team. Seattle, St. Louis and Arizona are all playing better football out west, and at 1-6, it is time to shut the door on the Niners. Can they put together some magical run to get back into this? I don’t see it.

5. Instant replay in Miami: That was a bad way to end the Steelers-Dolphins game in Miami. Ben Roethlisberger fumbles going into the end zone, is given a TD and then it goes to the booth. The problem? Can review the actual fumble, but not who comes up with the ball in the pile. Big Ben is going to say he had it, as will players on the Miami defense. But, we will never know the true outcome. For Miami, you make a big hit as a defense, but aren’t given the chance to finish the play. Something isn’t right about that.