What did the Super Bowl tell us about NFL offenses?

For players and coaches in the NFL there is a basic routine when it comes to starting your offseason film study. Break down your divisional opponents: personnel, schemes, top concepts, etc. That is a top priority heading into spring, (hopeful) mini-camps and OTAs.

But don’t forget about the Super Bowl—because that is on the list as well when it comes to film study.
I watched the Super Bowl on tape every offseason in my career for one simple reason: to break down the best. For current players it shouldn’t change. Study the Packers and the Steelers. Steal their techniques, their schemes and go inside the X’s and O’s. They were playing on the NFL’s biggest stage for a reason on Sunday night and it is your job as a player or coach to find out why from the tape. 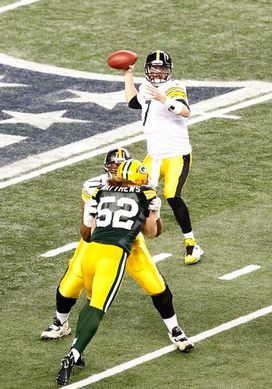 ICONRoethlisberger and Rodgers spread the field in their respective game plans.

And what they will see is a different style of football. Sure, we saw both Rashard Mendenhall of Pittsburgh and James Starks of Green Bay get carries (limited carries) in the traditional off-tackle power schemes: Power O, Counter OF, Lead Strong, Zone, etc.

But those schemes were just throw-ins from the script in Dallas. The real game was played in the pocket. Empty sets (more than I have seen from two teams all season), bunch looks, combination routes and red zone route schemes designed to test the top of the secondary.

The WR missile screen (or bubble screen) took the place of the running game. Quick inside breaking routes, such as the slant and the Hi-Lo concepts (underneath crossers), were big in the game plan. Spread the field and force the defense to use their sub packages (nickel, dime) for the majority of the game. Take advantage of the depth in the secondary.

A pattern? Yes, especially when it happens on the NFL’s biggest stage. You need three corners—and even four—that can come onto the field and matchup with a No.3 and No.4 WR. Strong safeties that can fill the hole in the run front, but more importantly play the deep half or walk down over the slot (and the speed of the current tight end position).

Plus, a free safety that has real range. Get from the middle of the field and overlap No.1 outside of the numbers. And make a play in top of that once you get there.

That my perspective if I am a defensive coordinator heading into this offseason. We do spend a lot of time talking and breaking down defensive fronts, rush backers the 3-4 scheme and the rush end in places such as Chicago, Indy, Minnesota. But the numbers last night from Ben Roethlisberger (25-40-263) and Rodgers (24-39-304) tell us that this is without a doubt a league that is driven by QBs and route concepts.

Stretch the field and attack defenses. We see it weekly in the college game and I think it is about to make a big jump into the NFL. Use the running game to set up those route schemes and put the game in the hands of your QB. Defenses beware and start studying this tape—because it will get contagious.

Check back to the NFP tomorrow where I will take you inside the X’s and O’s of Greg Jennings two TD receptions on the chalkboard and video.