What do DBs look for when they break the huddle?

In my Playbook series here at the NFP, I talk about schemes, route stems, techniques, etc. from a defensive perspective. Keys (and tendencies) that give a DB a jump on a route combination. However, what is the progression a DB runs through before the ball is even snapped?

Let’s take a look at the DB checklist when they break the huddle: 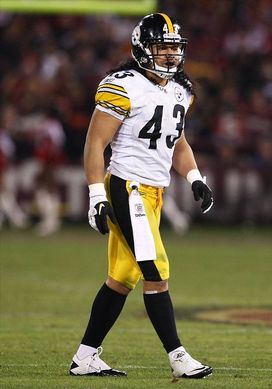 Troy Polamlau and the rest of the DBs in the NFL go through a progression when they break the huddle.

1. Down and distance: Sounds simple, but if you don’t know the game situation, you are in trouble. 3rd and 11-plus? You aren’t going to play for the “Spot” route or the Power O running scheme. Every defense will track offensive tendencies throughout the week in film study based on the sticks. This is usually the job of the SS to alert the entire defense of the down and distance situation in the huddle.

2. Field position: Ball in-between the 40’s? Expect a deep shot (and play action). The same can be said for a backed up situation or when the ball crosses the 20-yard line. Every offense will script their game plan based off of field position.

4. Formation: After you know the personnel, apply it to the formation at the line of scrimmage. A 3x1 set? Look for the front side “Tare” combination and the backside slant. 2x2 “Orange” (spread), “Dakota” (3x1 with TE removed as backside X receiver), “Slot Open,” “Trump Wing,” etc. They all tell you a story.

6. Pre-snap movement: The offense isn’t using short, “divide” motion just to move guys in the formation. Any type of pre-snap movement is done for a reason. This will impact your pre-snap disguise (especially if you have a pressure scheme called in the huddle), so know how to adjust.

“Sudden change” situation: After a turnover, expect something unique. Think gadget play (reverse, HB pass, etc.) or a vertical concept when you break the huddle. I was a victim of this during my career vs. the Giants. Kurt Warner and the offense came on the field (after a fumble) and took a deep shot (Corner-Post off of play action) on the first play—right over my head in Cover 2 for a TD.

Miss a spot on the progression after you break the huddle? Going to happen when you are tired or can't get off the field on third down during a 12-play drive. If that happens, read your keys and play ball…